Theodosia and the Staff of Osiris (The Theodosia Series #2) (Paperback) 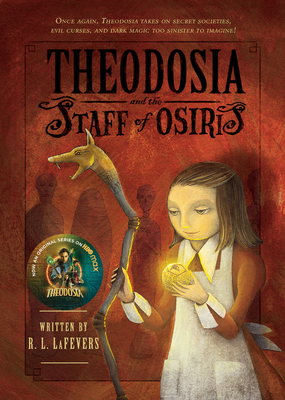 “Once again, Theo battles the Serpents of Chaos, but this time she must contend with her grandmother's determination to find her a suitable governess, some mysterious new artifacts at the museum, and an overly helpful assistant curator. Rarely does a sequel stand up as well as this one.”
— Sara Carter, Children's Bookshop, Kent, WA

Theodosia Throckmorton is in a fix.

Allowed to attend a reception given by one of the directors of her parents’ museum, she stumbles across Mr. Tetley of the British Museum—in most unusual circumstances! Since Theo has last seen him in a showdown in an ancient Egyptian tomb, his reappearance could mean only one thing: the Serpents of Chaos are back.

In this second book in the popular series, Theodosia will once again have to take on secret societies, evil curses, and magic too sinister to imagine, especially if it falls into the wrong hands. Blocked at every turn, Theodosia will have to rely on her own skill and cunning—along with a little help from the most unexpected places.

This highly praised, exciting middle grade series is a must for fans of mysteries, humor, and nonstop action.


Yoko Tanaka lives in Los Angeles and Bangkok with her husband and three cats. In addition to illustrating the Theodosia books, she has also illustrated The Magician’s Elephant by Kate DiCamillo and a picture book, Sparrow Girl by Sara Pennypacker. Her artwork can be found at yokotanaka.com