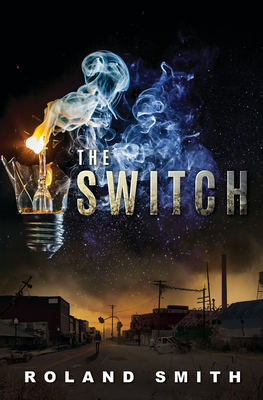 A thrilling dystopic story from Roland Smith about how far people will go to survive -- perfect for fans ofDry and Distress Signal.

On the morning of Henry Ludd's thirteenth birthday, the power goes out. No phones, no news, and planes are literally falling out of the sky. Henry's father was away from the family farm and he has not returned. It's worrisome as people descend into lawlessness.

Four months later, the electricity still hasn't come back. While Henry's family is protected in their walled compound with wind turbines fueling their electricity, the rest of their area has suffered. Henry's father still hasn’t been found. Determined to find him, Henry ventures out with a trading crew to the zoo where his dad was last seen. After the truck is hijacked and Henry is left behind, he's forced to travel alone through the unruly world of the Switch. But his journey home will lead him to cross paths with the people who took his dad and have been trying to take over his family's land and resources ever since.

Roland Smith first worked with animals at the Oregon Zoo, and he has been involved in animal rescues and conservation work around the world for more than 20 years. He is the author of numerous books for young readers, including Jack's Run, Zach's Lie, Peak, the Cryptid Hunters series, and the Storm Runners series. He is also the coauthor of numerous picture books with his wife, Marie. Roland lives with Marie on a farm south of Portland, Oregon. You can find him online at rolandsmith.com.

Praise for Beneath:"A tightly plotted mystery that incorporates themes of nonconformity and social rebellion... Humor, a perilous setting, [and] intense relationships... give the story emotion and grit." -- Publishers Weekly"A fast-paced, compelling read. Fans of Smith will not be disappointed." -- BooklistPraise for the Storm Runners series:"A breakneck read, perfectly geared to the restless and reluctant." -- Bulletin of the Center for Children's Books"This slice of natural disaster... offers nary a dull moment. A high-velocity page-turner." -- Kirkus Reviews