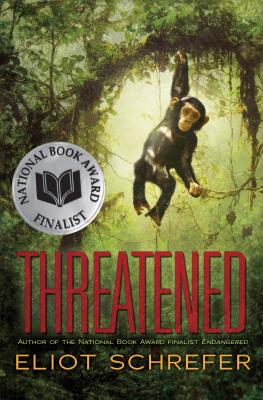 When he was a boy, Luc's mother would warn him about the "mock men" living in the trees by their home -- chimpanzees whose cries would fill the night.

Luc is older now, his mother gone. He lives in a house of mistreated orphans, barely getting by. Then a man calling himself Prof comes to town with a mysterious mission. When Luc tries to rob him, the man isn't mad. Instead, he offers Luc a job.

Together, Luc and Prof head into the rough, dangerous jungle in order to study the elusive chimpanzees. There, Luc finally finds a new family -- and must act when that family comes under attack.

As he did in his acclaimed novel ENDANGERED, a finalist for the National Book Award, Eliot Schrefer takes us somewhere fiction rarely goes, introducing us to characters we rarely get to meet. The unforgettable result is the story of a boy fleeing his present, a man fleeing his past, and a trio of chimpanzees who are struggling not to flee at all.

Eliot Schrefer's Endangered and Threatened were named as finalists for the National Book Award. He is also the author of The Deadly Sister, The School for Dangerous Girls, Glamorous Disasters, and The New Kid. He lives in New York City. Visit him online at www.eliotschrefer.com.

*"Gripping…Schrefer pulls no punches as he showcases the beauty and danger of both urban Gabon and the jungle." --Publishers Weekly, starred review

"Fascinating and sure to lead to discussion." --School Library Journal

"Schrefer's compassion and empathy for the people and chimpanzees and other animals of this part of Africa come through loud and clear." --Horn Book

"Dazzling, big-hearted . . . As riveting as the action is, it's the nuanced portraits of the characters, human and ape, that make the story so deeply affecting." --The New York Times Book Review

* "Schrefer spares no detail . . . This drama is clearly written from the heart." --Publishers Weekly, starred review

Kirkus Starred Review
The author of Endangered (2012) introduces another primate species, offering a poignant demonstration of connection between chimpanzees and humans.

When AIDs orphan Luc goes into the Gabon jungle with professor Abdul Mohammed, a scientist who frees him from his bondholder and plans to study chimpanzees in the wild, the resourceful boy finds a surprising new family and makes a real home. Luc’s story is riveting and seldom comfortable, for him or for his readers. The chimpanzees are aggressive, but they are not as lethal as the leopard or as personally dangerous as the bushmeat hunter the professor frightens away or Monsieur Tatagani, determined to return Luc to his stable of street boys. Drummer, the young male chimp Luc rescues from a trap, and Mango, his toddler sister, have personalities as real and appealing as the boy himself. Luc’s first-person narration is so lively and detailed readers won’t notice that he seems remarkably acute for a 12- or 13-year-old, even one who has watched his mother and baby sister die and lived, afterward, by his own wits. The particulars of his daily life Inside—where Gabonese believe humans shouldn’t go—will enthrall those who enjoy adventure, and the intimate glimpse of chimpanzee daily life is a treat for nature lovers.

Engrossing action and characters readers will keep thinking about in a splendid survival story.