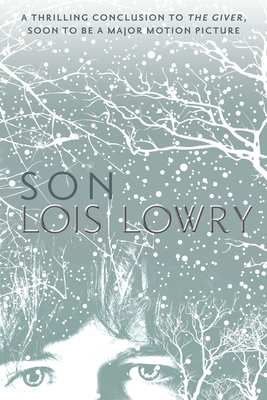 This is book number 4 in the Giver Quartet series.

“So much about the community in The Giver is mysterious to its members. In Son, an aspect that many readers couldn't help but wonder about -- the experience of the Birthmothers -- is detailed. A compelling final volume, this new story adds depth and maturity to The Giver quartet.”
— Shoshana Flax, Brookline Booksmith, Brookline, MA

They called her Water Claire. When she washed up on their shore, no one knew that she came from a society where emotions and colors didn’t exist. That she had become a Vessel at age thirteen. That she had carried a Product at age fourteen. That it had been stolen from her body. Claire had a son. But what became of him she never knew. What was his name? Was he even alive? She was supposed to forget him, but that was impossible. Now Claire will stop at nothing to find her child, even if it means making an unimaginable sacrifice.

Son thrusts readers once again into the chilling world of the Newbery Medal winning book, The Giver, as well as Gathering Blue and Messenger where a new hero emerges. In this thrilling series finale, the startling and long-awaited conclusion to Lois Lowry’s epic tale culminates in a final clash between good and evil.

Lois Lowry is the author of more than forty books for children and young adults, including the New York Times bestselling Giver Quartet and popular Anastasia Krupnik series. She has received countless honors, among them the Boston Globe-Horn Book Award, the Dorothy Canfield Fisher Award, the California Young Reader’s Medal, and the Mark Twain Award. She received Newbery Medals for two of her novels, Number the Stars and The Giver. Her first novel, A Summer to Die, was awarded the International Reading Association’s Children’s Book Award. Ms. Lowry lives in Maine.
www.loislowry.com
Twitter @LoisLowryWriter

"Written with powerful, moving simplicity, Claire's story stands on its own, but as the final volume in this iconic quartet, it holistically reunites characters, reprises provocative socio-political themes, and offers a transcending message of tolerance and hope. Bravo!"
—Kirkus, starred review

"Lowry is one of those rare writers who can craft stories as meaningful as they are enticing."
—Booklist, starred review

"Son is a tender conclusion to this memorable story, and definitely the best of the books in this sequence since The Giver itself."
—School Library Journal, starred review

"The strength of this novel is its compassionate portrait of a mother's commitment to her lost child."
—Horn Book

"In the completely absorbing opening, Lowry transports readers back to the horrifying world from which Jonas came."
—Publishers Weekly

“A consummate stylist, Lowry handles it all magnificently: the leaps in time, the shifts in perspective, the moments of extreme emotion — fear, joy, sadness — all conveyed in unadorned prose that seizes the heart. Give this book to your child, your grandmother, your senator, your neighbor: It’s a bipartisan tale for our times.”
—The Washington Post

“It's the kind of book that will stay with you for days as you wonder about what it says about human nature, society, and the future of society.”
—YPulse.com

"A quiet, sorrowful, deeply moving exploration of the powers of empathy and the obligations of love."
—The New York Times Book Review