The Game of Kings: Book One in the Legendary Lymond Chronicles (Paperback) 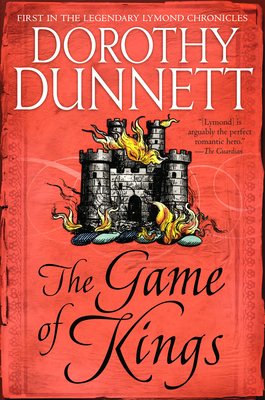 Combining all the political intrigue of Game of Thrones with the sweeping romanticism of Outlander, Dorothy Dunnett’s legendary Lymond Chronicles have enthralled readers for decades and amassed legions of devoted fans. The first book in the series introduces Dunnett’s unforgettable antihero as he returns to Scotland with a wild plan to redeem his reputation and save his home.

The year is 1547. Scotland is clinging to independence after a humiliating English invasion. Paradoxically, the country’s freedom may depend on a man who stands accused of treason. He is Francis Crawford of Lymond, a scapegrace nobleman of crooked felicities and murderous talents, with a scholar’s erudition and a wicked tongue. Clawing his way back into a country that has outlawed him, and to a family that has turned its back on him, Lymond will prove that he has both the will and the cunning to clear his name and defend his people—no matter the cost.

DOROTHY DUNNETT was born in Dunfermline, Scotland. She is the author of the Francis Crawford of Lymond novels; the House of Niccolò novels; seven mysteries; King Hereafter, an epic novel about Macbeth; and the text of The Scottish Highlands, a book of photographs by David Paterson, on which she collaborated with her husband, Sir Alastair Dunnett. In 1992 she was made an Officer of the Order of the British Empire for services to literature. Lady Dunnett died in 2001.

“[Lymond] is arguably the perfect romantic hero.”
—The Guardian

“Vivid, engaging, densely plotted. . . . Dunnett is a master of suspense and misdirection.”
—The New York Times

“First-rate . . . suspenseful. . . . Her hero, in his rococo fashion, is as polished and perceptive as Lord Peter Wimsey and as resourceful as James Bond.”
—The New York Times Book Review

“Dorothy Dunnett is one of the greatest talespinners since Dumas . . . breathlessly exciting.”
—Cleveland Plain Dealer

“Dunnett is a name to conjure with. Her work exemplifies the best the genre can offer.”
—The Christian Science Monitor

“Ingenious and exceptional . . . its effect brilliant, its pace swift and colorful and its multi-linear plot spirited and absorbing.”
—Boston Herald

“Dunnett evokes the sixteenth century with an amazing richness of allusion and scholarship, while keeping a firm control on an intricately twisting narrative. She has another more unusual quality . . . an ability to check her imagination with irony, to mix high romance with wit.”
—Sunday Times (London)

“A very stylish blend of high romance and high camp. Her hero, the enigmatic Lymond, [is] Byron crossed with Lawrence of Arabia. . . . He moves in an aura of intrigue, hidden menace and sheer physical daring.”
—Times Literary Supplement (London)

“With shrewd psychological insight and a rare gift of narrative and descriptive power, Dorothy Dunnett reveals the color, wit, lushness . . . and turbulent intensity of one of Europe’s greatest eras.”
—Raleigh News and Observer