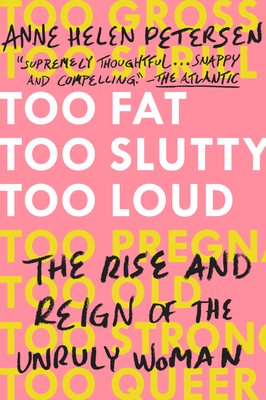 “Petersen's gloriously bumptious, brash ode to nonconforming women suits the needs of this dark moment. Her careful examination of how we eviscerate the women who confound or threaten is crucial reading if we are ever to be better.”—Rebecca Traister, New York Times bestselling author of All the Single Ladies

NOW WITH A NEW FOREWORD BY THE AUTHOR

You know the type: the woman who won’t shut up, who’s too brazen, too opinionated—too much. Sometimes she's the life of the party; other times she's the center of gossip. She's the unruly woman, and she's on eof the most provocative, powerful forms of womanhood today.

“Must-read list.”—Entertainment Weekly
Named one of Cosmopolitan’s “Books You Won't Be Able to Put Down This Summer”
Selected as one of Amazon's “Best Books of the Month”
A Refinery29 Editors' Pick

ANNE HELEN PETERSEN received her PhD in media studies from the University of Texas, where she studied the industrial history of the gossip industry. Today, she writes about culture, celebrity, and feminism for BuzzFeed News. Her first book, Scandals of Classic Hollywood, was featured in The Boston Globe, Time, NPR’s Pop Culture Happy Hour, Bitch, the New York Post, and The Rumpus. She lives in Brooklyn.

“Petersen interrogates our culture with precision and nuance.”
—NPR, Best Books of 2017

“Supremely thoughtful...snappy and compelling...[Petersen’s essays] highlight the paradoxical expectations American culture places on women, in particular, the mixed messages it sends: the ‘you can do anything,’ rubbing awkwardly against the ‘you can’t do everything.’”
—Megan Garber, The Atlantic

“A timely and essential read...Petersen’s analytical skills are as vigorous [and] her prose and reporting are entertaining.”
—Keziah Weir, ELLE

“Deeply thoughtful… after a few chapters of Petersen's cautious, intelligent optimism, [the subtitle] feels instead like an instruction, a warning, a promise, a threat. Rise and reign. Maybe we could.”
—Annalisa Quinn, NPR

“Cultural critic extraordinaire Anne Helen Petersen pens a love letter to women who go against the grain in this collection of incisive essays.”
—Maris Kreizman, Vulture

“Petersen writes with equal amounts of rigor and empathy...her point feels like a warning bell: Our cultural lens on celebrity women reflects back on women en masse. We don’t have to love their unruliness, but we need to change the attitudes that so narrowly define them.”
—Andi Zeisler, Bitch

“Anne Helen Petersen's gloriously bumptious, brash ode to non-conforming women suits the needs of this dark moment. Petersen's careful examination of how we eviscerate the women who confound or threaten is crucial reading if we are ever to be better.”
—Rebecca Traister, New York Times bestselling author of All the Single Ladies

“In a time when women are under constant attack, I am so grateful for Anne Helen Petersen's sharp and topical book. Petersen nails the magnetism of women who break boundaries and the punishment that often comes along with it. All women will see a bit of themselves in the ‘unruly.’”
—Jessica Valenti, New York Times bestselling author of Sex Object

“Bold and empowering...an engaging exploration of the women celebrities who are defying stereotypes and redefining what it means to be female.”
—Bustle

“[Petersen’s] research and observations are eye-opening...but the best part of the book is Petersen's devotion to intersectionality, which is all too often missing from discussions about feminism. For anyone who considers themselves a feminist, this book is a must-read.”
—Meghan DeMaria, Refinery 29

“Thought-provoking...Through incisive analysis of the ways in which contemporary society polices femininity, Petersen reveals the fraught relationship between women and celebrity. A sharp, compelling collection of social and cultural criticism.”
—Kirkus

"Here is a book whose delight in its own wonkiness is infectious, and whose deep empathy for its subjects is also matched with fair-minded critique…. Petersen provides a fresh glimpse at how we might imagine our nation’s rebuilding.”
—Megan Burbank, The Portland Mercury

“Engaging...Petersen is an author for our age.”
—The Boston Globe

“Clear and convincing...intelligent analysis [written] with the verve of an enthusiast.”
—LA Times

“Smart, relevant, and fun...think TMZ with a PhD.”
—Bitch

“By delving into why we love, hate or love to hate different faces in our media stream, Petersen gives the reader a chance to reflect on our own biases and opinions on the societal roles people are supposed to play.”
—Richmond News