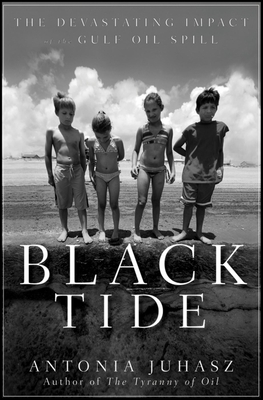 It is the largest oil disaster in American history, and it could happen again. It is more than a story of ruined beaches, dead wildlife, corporate spin, political machinations, and financial fallout. It is a riveting human drama filled with people whose lives will forever be defined as ""before"" and ""after the gulf oil disaster."" Black Tide is the only book to tell this story through the perspective of people on all sides of the catastrophe, from those who lost their lives, loved ones, and livelihoods to those who made the policies that set the devastating event in motion, those who cut the corners that put corporate profits over people and the environment, and those who have committed their lives to ensuring that such an event is never repeated.

Dramatic and compelling, Black Tide exposes the human failings and human cost of the largest oil disaster in American history and how it could easily happen again.

""We cannot allow the BP disaster to be pushed from public view the way BP used chemical dispersants to hide the oil. These remarkable stories-of loss, heroism and culpability-are a vivid reminder that this catastrophe will be with us for decades, and that we have not yet made the changes necessary to prevent destruction in the future.""
-Naomi Klein, author of The Shock Doctrine: The Rise of Disaster Capitalism.

""It's hard to imagine a better person to turn loose on this epochal disaster than Antonia Juhasz, with her compassionate heart, vivid prose, and rich expertise in both oil and economic policy. From oil-smeared beaches, to the drilling rig's control room, to the big picture of Big Oil and the governments they push around. It's not just about disaster: it's a series of encounters with real people, from oceanographers to oyster-shuckers, striving to make things right. Black Tide is riveting, infuriating, and incredibly important.
-Rebecca Solnit, author of A Paradise Built in Hell: The Extraordinary Communities that Arise in Disaster

Praise for The Tyranny of Oil

""Reminds us that those who don't learn the lessons of history are fated to repeat its mistakes."" -USA Today

Antonia Juhasz is a leading oil industry expert and Director of the Energy Program at Global Exchange. She is the author of The Tyranny of Oil and The Bush Agenda, and editor of The True Cost of Chevron: An Alternative Annual Report, 2009 and 2010. She has covered and commented on the BP disaster on NPR, BBC Radio, CBC TV, and Democracy Now!, and in the Guardian, the Times-Picayune, Ms. Magazine, and Dollars & Sense. Her oil industry analyses have been published in the New York Times, International Herald Tribune, Petroleum Review Magazine, Washington Post, and the Los Angeles Times, and she was featured in the CNBC documentary The Hunt for Black Gold and on Fresh Air with Terry Gross. A former legislative assistant to two members of Congress, Juhasz holds a master's degree in public policy from Georgetown University. Her Web site is www.black-tide.org.