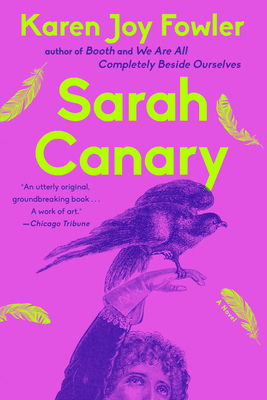 When black cloaked Sarah Canary wanders into a Chinese labor camp in the Washington territories in 1873, Chin Ah Kin is ordered by his uncle to escort “the ugliest woman he could imagine” away. Far away. But Chin soon becomes the follower.

In the first of many such instances, they are separated, both resurfacing some days later at an insane asylum. Chin has run afoul of the law and Sarah has been committed for observation. Their escape from the asylum in the company of another inmate sets into motion a series of adventures and misadventures that are at once hilarious, deeply moving, and downright terrifying.

“Powerfully imagined...Drop everything and follow Sarah Canary....Humor and horror, history and myth dance cheek to cheek in this Jack London meets L. Frank Baum world....Here is a work that manages to be at the same time (and often in the same sentence) dark and deep and fun.”—The Washington Post Book World

Karen Joy Fowler, a PEN/Faulkner and California Book Award winner, is the author of six novels (two of them New York Times bestsellers) and four short story collections. She has been a Dublin IMPAC nominee, and was shortlisted for the Man Booker Prize in 2014. She lives in Santa Cruz, California.

“A playful romp through the Pacific Northwest at the end of the last century, mixing poetry and newspaper reports into a wild yarn.”—San Francisco Chronicle

“Sarah Canary is certainly an enchanted and enchanting narrative, and Karen Fowler has found her way from the details of what we take to be our history, our past, to the legend that is our true present. Her powers of evocation of character and consequence, her storytelling gifts, are exhilarating, and she has given us, at the beginning of her writing life, a work with the suggestive authority—and the evanescent, haunting power—of myth.”—W.S. Merwin

“[A] quirky, original tale...marvelously framed in the events and scenery of the Northwest frontier.”—San Antonio Express-News

“Remarkable...A fascinating romp, in which actual events are so cleverly intertwined with the author’s fanciful inventions that the reader grows unsure which to disbelieve.”—Kirkus Reviews (starred review)