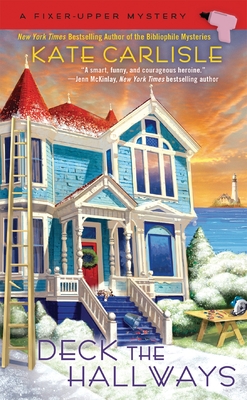 This is book number 4 in the A Fixer-Upper Mystery series.

In the fourth novel in the New York Times bestselling Fixer-Upper Mystery series, contractor Shannon Hammer must restore the Christmas spirit by clearing her father's name...

Even during the holidays, Shannon is more spackle than sparkle, which is why she leaps at the chance to transform a grand old Victorian mansion into ten charming apartments for homeless families. Filled with the spirit of the season, all of Lighthouse Cove turns out to help—including her best friends, a troupe of far-from-angelic Santa Claus impersonators, and her father, Jack.

But their merriment is soon dashed by a heated scuffle between Jack and the miserly president of the bank who’s backing the project. When the man is murdered, all eyes are on Jack, and visions of prison time dance in Shannon's head. Now, she needs to pull off a crime-solving miracle, before her father’s Christmas goose is cooked...