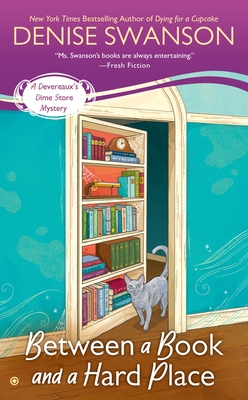 The New York Times bestselling author of Dying for a Cupcake returns with a new mystery filled with lost family, hidden treasure, and long-buried secrets...

Five-and-dime store owner Devereaux “Dev” Sinclair moved to Shadow Bend for her family. But when her long-lost mother shows up in town, she realizes too much kin can be killer...

Shadow Bend’s library closed years ago because of budgetary problems, so when a wealthy benefactor offers to reopen it, everyone, including Dev, is thrilled. But Dev’s excitement wanes when she realizes the mysterious donor is actually her runaway mother Yvette’s latest husband, Jett Benedict.

Dev suspects that Yvette and Jett’s intentions aren’t as noble as they appear, but before she can discover what they’re really up to, Jett turns up dead—and all clues point to Yvette as the prime suspect.

Even though Dev has no loyalty to Yvette, she’s in a bind. Setting the record straight could prove her mother is a killer. But doing nothing might get her mother booked for a crime she didn’t commit...

Denise Swanson is the New York Times bestselling author of the Scumble River Mysteries, including Murder of an Open Book and Murder of a Needled Knitter, and the Devereaux’s Dime Store Mysteries, including Dying for a Cupcake and Dead Between the Lines. She worked as a school psychologist for twenty-two years before quitting to write full-time. She lives in Illinois with her husband, classical music composer David Stybr, and their cool black cat, Boomerang.

“Swanson has a gift for portraying small-town life.”—AnnArbor.com