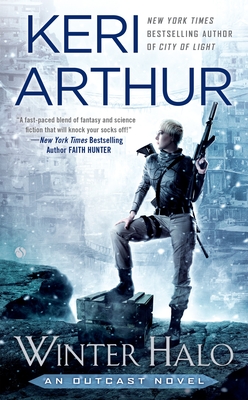 This is book number 2 in the An Outcast Novel series.

From the New York Times bestselling author of the Souls of Fire novels comes the second in the futuristic fantasy series that will make you want to keep the lights on...

When the bombs that stopped the species war tore holes in the veil between worlds, they allowed entry to the Others. Now, a hundred years later, humans and shifters alike live in artificially lit cities designed to keep the darkness at bay....

The humanoid supersoldiers known as the déchet were almost eradicated by the war. Ever since, Tiger has tried to live her life in peace in hiding. But in the wake of her discovery that Central City’s children are being kidnapped and experimented on, Tiger’s conscience won’t let her look the other way.

The key to saving them lies within the walls of a pharmaceutical company called Winter Halo. But as she learns more about the facility, Tiger’s mission is derailed by a complication: Winter Halo’s female security guards are being systematically attacked by an unknown force.

Now Tiger must summon all her gifts to stop those responsible for both atrocities—no matter the cost to herself...

Keri Arthur is the New York Times bestselling author of the Outcast series, including City of Light, as well as the Souls of Fire, Dark Angels, and Riley Jenson Guardian series. She has written more than thirty books and has been nominated in the Best Contemporary Paranormal category of the Romantic Times Reviewers’ Choice Awards and has won a Romantic Times Career Achievement Award for urban fantasy.

“A fast-paced blend of fantasy and science fiction that will knock your socks off! Plan to stay up all night.”—New York Times bestselling author Faith Hunter on City of Light and the Outcast series

“Keri Arthur’s imagination and energy infuse everything she writes with zest.”—Charlaine Harris

“Keri Arthur has blown me away again. Her worlds are so complex and ‘real.’….I highly recommend Arthur’s books.”—USA Today