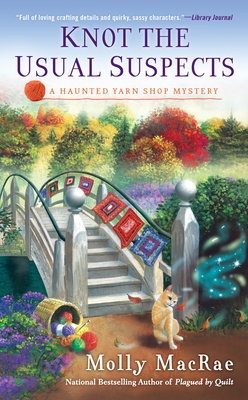 This is book number 5 in the Haunted Yarn Shop Mystery series.

In the latest from the bestselling author of Plagued by Quilt, Kath Rutledge yarn bombs Blue Plum, Tennessee—and gets tangled up in the mystery of a bumped-off bagpiper.

It’s time for Handmade Blue Plum, an annual arts and crafts fair, and Kath and her knitting group TGIF (Thank Goodness It’s Fiber) plan to kick off the festivities with a yarn bombing. But they’re not the only ones needling Blue Plum. Bagpiper and former resident Hugh McPhee had just returned after a long absence, yet his reception is anything but cozy. The morning after his arrival, he’s found dead in full piper’s regalia.

Although shaken, Kath and her knitting group go forward with their yarn installation—only to hit a deadly snag. Now, with the help of Geneva, the ghost who haunts her shop, Kath and TGIF need to unravel the mystery before someone else gets kilt!

Molly MacRae, national bestselling author of Plagued by Quilt, Spinning in Her Grave, and Dyeing Wishes, was director of the history museum in Jonesborough, Tennessee’s oldest town, and later managed an independent bookstore in Johnson City. Her short stories have appeared in Alfred Hitchcock Mystery Magazine for more than twenty years, and she has won the Sherwood Anderson Award for Short Fiction.