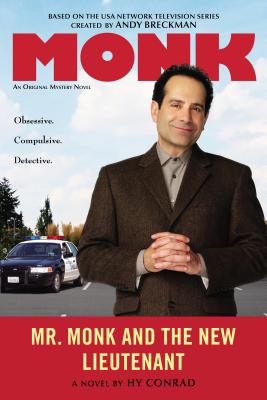 This is book number 19 in the Mr. Monk series.

Monk and Natalie have finally settled into a new office routine. Now they just need to work things out with their neighbors--a print shop run by hippies whose music leaks through the walls, driving Monk nuts. But the detectives soon have a more serious conflict to deal with: Captain Stottlemeyer's new lieutenant, A.J. Cartledge--a man of limited skills whom Monk finds insufferable.
Even the presence of Lieutenant Cartledge won't keep Monk and Natalie from attending the funeral of Judge Oberlin, and it's a good thing. In typical fashion, Monk examines the body in the casket--and finds evidence of poison. The judge was murdered.
While there are no traces of the poison at the judge's house, Monk detects that there had been an intruder. The next rainy day, when Captain Stottlemeyer begins to show the same symptoms, Monk deduces that there's a diabolical killer at work, someone who wanted both the judge and the captain dead. Monk and Natalie turn to the captain's ex-lieutenant in Summit, New Jersey for help, but even that might not be enough to solve this crime. With his friend in danger and an enemy close, Monk will have to put his reservations aside to crack the case in time.

Hy Conrad was one of the original writers on the USA Network television series Monk and stayed with the series for all eight seasons, acting as coexecutive producer for the last two seasons and garnering three Edgar(R) Award nominations. In addition, Hy was head writer of the webisode series Little Monk and served as consulting producer and writer on the USA series White Collar. He is the author of hundreds of short stories, dozens of interactive mysteries, and ten books of solvable whodunits, sold around the world in fourteen languages. His first original mystery novel series, Amy's Travel Mysteries, will premiere in February, 2015, with the publication of Toured to Death.