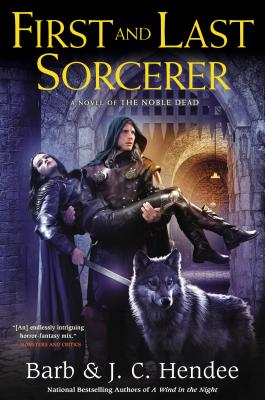 This is book number 10 in the Noble Dead series.

Waylaid in their quest for the orb of the Air, Magiere, Leesil, Chap, and Wayfarer have all been wrongly imprisoned. But it is Magiere, the dhampir, who suffers the most as a cloaked interrogator employs telepathic torture.

Arriving at the Suman port city in search of Magiere, Wynn Hygeorht and her companions—including vampire Chane Andraso—seek out Domin Ghassan il’Sänke for assistance, which proves no easy task. The domin is embroiled in a secret hunt for a spectral undead with the power to invade anyone living and take the body as its host.

Even if Wynn can manage to free her friends from prison, battling this entirely new kind of undead hidden inside host bodies may be a challenge none of them can survive....

Barb and J. C. Hendee live in a quirky little town near Portland, Oregon, with two geriatric and quite demanding cats. Barb’s short fiction has appeared in numerous genre magazines and anthologies. She is the author of the Vampire Memories and Mist-Torn Witches series. J.C.’s poetry, nonfiction, and short fiction have also appeared in many genre magazines. Their Noble Dead novels include A Wind in the Night, The Dog in the Dark, and Of Truth and Beasts.

Praise for The Noble Dead Saga “A mix of The Lord of the Rings and Buffy the Vampire Slayer.”—New York Times Bestselling Author Kevin J. Anderson

“The Noble Dead Saga…is no simple myth, but rather a true epic, which stands at the highest levels of fantasy lore.”—BSCReview“The Hendees never fail to impress and entertain.”—SciFiChick.com
"Maintains a high level of excitement...a lively fantasy world."—The Denver Post