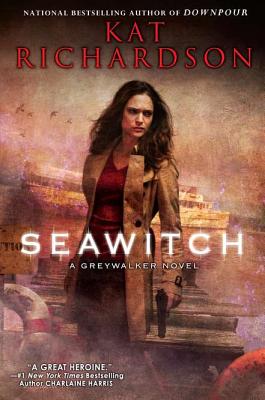 By Kat Richardson
Unavailable to Order
Out of Print

"Harper Blaine was your average small-time PI until she died for two minutes. Now Harper is a Greywalker, treading the thin line between the living world and the paranormal realm. And she's discovering that her new abilities are landing her all sorts of strange cases."

A quarter century ago, the Seawitch cruised away from her dock and disappeared with everyone on board. Now, the boat has mysteriously returned to her old berth in Seattle and the insurance company has hired Harper to find out what happened.

But Harper is not the only one investigating. Seattle Police Detective Rey Solis is a good cop, albeit one who isn t comfortable with the creepy cases that always seem to end up in Harper's lap. As they explore the abandoned vessel, Harper and Solis discover a cabin containing symbols drawn in human blood, revealing the ghost ship's grave history.

As Solis focuses on the possible murder of a passenger's wife, Harper's investigation leads her to a powerful being who may be responsible for the disappearance of the Seawitch's passengers and crew. And while their searches lead Harper and Solis in different directions, they will need to put aside their differences to solve a deadly mystery twenty-five years in the making

Kat Richardson lives on a boat in Seattle with her husband and a small pit bull--who is not the world's largest ferret, no matter how much she pretends.. Kat rides a motorcycle, shoots target pistol, and has been known to swing dance, sing, and spend insufficient time at the gym.