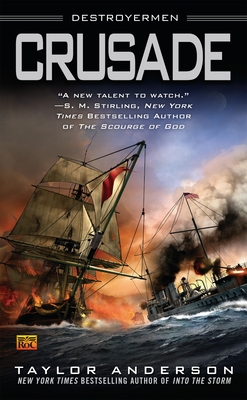 This is book number 2 in the Destroyermen series.

After being swept from the World War II Pacific into an alternate world, Lieutenant Commander Matthew Patrick Reddy and the crew of the USS Walker have allied with the peaceful Lemurians in their struggle against the warlike, reptilian Grik. But they are sorely outnumbered, and even the power of the Walker cannot turn the tide of battle.

Then, Reddy finds Mahan—the other destroyer that passed through the rift. Together, the ships will teach the Lemurians to stand and fight. Or so they think. For there is another vessel at large: the Amagi—the massive Japanese battleship that Walker was fleeing back in the Pacific. The Amagi also came through the rift...

And the Amagi is in the hands of their enemies.

Taylor Anderson is the New York Times bestselling author of the Destroyermen series. A gunmaker and forensic ballistic archaeologist, Taylor has been a technical and dialogue consultant for movies and documentaries. He is also a member of the National Historical Honor Society and the United States Field Artillery Association, which awarded him the Honorable Order of St. Barbara. He has a master’s degree in history and has taught that subject at Tarleton State University in Stephenville, Texas. He lives in nearby Granbury with his family.

Praise for the Destroyermen series

“Gripping and riveting...I look forward to the unfolding of this series and his subsequent work.”—S.M. Stirling, New York Times bestselling author

“Pick up the Destroyermen series and kick back and enjoy.”—SFRevu