The Havoc Machine: A Novel of the Clockwork Empire (Mass Market) 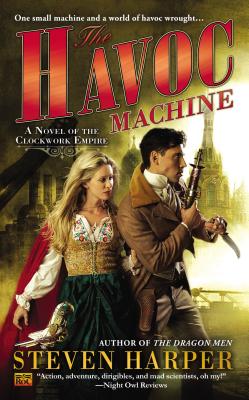 By Steven Harper
$8.79
Email or call for price.

In a world riddled with the destruction of men and machines alike, Thaddeus Sharpe takes to the streets of St. Petersburg, geared toward the hunt of his life….

Thaddeus Sharpe’s life is dedicated to the hunting and killing of clockworkers. When a mysterious young woman named Sofiya Ekk approaches him with a proposition from a powerful employer, he cannot refuse. A man who calls himself Mr. Griffin seeks Thad’s help with mad clockwork scientist Lord Havoc, who has molded a dangerous machine. Mr. Griffin cares little if the evil Lord lives or dies; all he desires is Havoc’s invention.

Upon Thad’s arrival at Havoc’s laboratory, he is met with a chilling discovery. Havoc is not only concealing his precious machine; he has been using a young child by the name of Nikolai for cruel experiments. Locked into a clockwork web of intrigue, Thad must decipher the dangerous truth surrounding Nikolai and the chaos contraption before havoc reigns….

Steven Harper has written more than 20 novels, including the Clockwork Empire steampunk series and the Books of Blood and Iron fantasy series. When not writing, he teaches high school English in Michigan. Steven also plays the folk harp, wrestles with his kids, and embarrasses his youngest son in public.

Praise for the Clockwork Empire Series

“Harper creates a fascinating world of devices, conspiracies, and personalities….Filled with danger and narrow escapes, Alice and Gavin fight to survive and to find love in this steampunk coming-of-age story. Harper’s world building is well developed and offers an interesting combination of science and steam.”—SFRevu

“The Clockwork Empire books are changing what we know as steampunk!...An exuberant novel that takes the reader on an action-packed adventurous thrill ride.”—Nocturne Romance Reads

“An exciting adventure thriller that starts off with action and never slows down.”—Genre Go Round Reviews