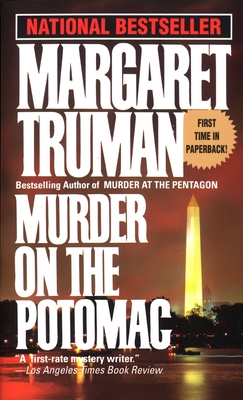 This is book number 12 in the Capital Crimes series.

MURDER ON THE POTOMAC

"A first-rate mystery writer."
--Los Angeles Times Book Review
First time in paperback!
"Harry's daughter knows her milieu; better still, she knows how to portray it convincingly."
--The San Diego Union
Law professor Mac has unflagging passion for two things in his life: his wife Annabel and the majestic Potomac River. When Mac discovers a weed-shrouded body in the latter, the former gets edgy. Lovely Annabel, owner of a flourishing Georgetown art gallery, must not only endure her husband's obsession with another killing, but she must believe Mac when he says that a stunning female former student is one of the only people who can help him.
They discover that the corpse was once the confidante' of a wealthy Washingtonian, which leads to the Scarlet Sin Society, a theatrical group that--perilously--reenacts historical murders. And soon, the only thing that matters more to Mac than solving this serpentine case is preventing Annabel's untimely death (.
"Truman 'knows the forks' in the nation's capital and how to pitchfork her readers into a web of murder and detection."
--The Christian Science Monitor
"Margaret Truman has settled firmly into a career of writing murder mysteries, all evoking brilliantly the Washington she knows so well."
--The Houston Post

Margaret Truman won faithful readers with her works of biography and fiction, particularly her ongoing series of Capital Crimes mysteries. Her novels let us into the corridors of power and privilege, and poverty and pageantry, in the nation’s capital. She was the author of many nonfiction books, including The President’s House, in which she shares some of the secrets and history of the White House where she once resided. Truman lived in Manhattan and passed away in 2008.