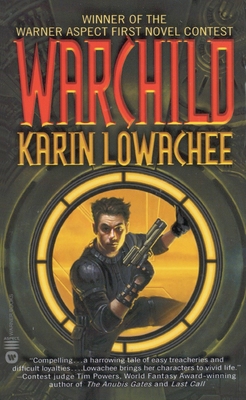 Karin Lowachee's debut novel is the engrossing story of a young boy's coming of age amid interstellar war, a riveting saga in the tradition of Orson Scott Card's Ender's Game.

The merchant ship Mukudori encompasses the whole of eight-year-old Jos's world, until a notorious pirate destroys the ship, slaughters the adults, and enslaves the children. Thus begins a desperate odyssey of terror and escape that takes Jos beyond known space to the home of the strits, Earth's alien enemies.

To survive, the boy must become a living weapon and a master spy. But no training will protect Jos in a war where every hope might be a deadly lie, and every friendship might hide a lethal betrayal. And all the while he will face the most grueling trial of his life... becoming his own man.

Karin Lowachee was born in Guyana, South America and moved to Toronto, Canada when she was two. Before her foray into fantasy, she wrote three highly-acclaimed science fiction novels: Warchild, Burndive, and Cagebird. Warchild won the Warner Aspect First Novel Award and Cagebird won the 2006 Gaylactic Spectrum Award and the Prix Aurora Award and was a finalist for the 2002 Philip K. Dick Award. She currently resides in Ontario, Canada.