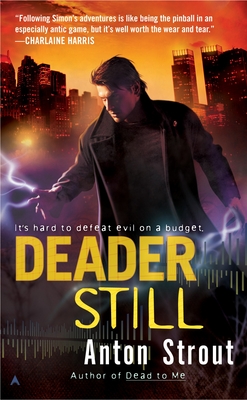 This is book number 2 in the A Simon Canderous Novel series.

FROM THE AUTHOR OF DEAD TO ME.

It’s been 737 days since the Department of Extraordinary Affairs’ last vampire incursion, but that streak appears to have ended when a boat full of dead lawyers is found in the Hudson River. Using the power of psychometry—the ability to divine the history of an object by touching it—agent Simon Canderous discovers that the booze cruise was crashed by something that sucked all the blood out of the litigators. Now, his workday may never end—until his life does.

Anton Strout is the author of the Spellmason Chronicles and the Simon Canderous series. He was born in the Berkshire Hills, mere miles from writing heavyweights Nathaniel Hawthorne and Herman Melville. He currently lives in historic Jackson Heights, New York (where nothing paranormal ever really happens, he assures you). In his scant spare time, he is an always writer, a sometimes actor, sometimes musician, occasional RPGer, and the world's most casual and controller-smashing video gamer. He currently works in the exciting world of publishing and, yes, it is as glamorous as it sounds.