Dead To Me (A Simon Canderous Novel #1) (Mass Market) 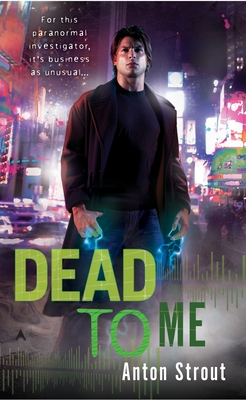 This is book number 1 in the A Simon Canderous Novel series.

A new urban fantasy featuring a man working on the right side of law-with talents that come from left field.

Psychometry-the power to touch an object and divine information about its history-has meant a life of petty crime for Simon Canderous, but now he's gone over to the good side. At New York's underfunded and (mostly) secret Department of Extraordinary Affairs, he's learning about red tape, office politics, and the basics of paranormal investigation. But it's not the paperwork that has him breathless.

After Simon spills his coffee on (okay, through) the ghost of a beautiful woman- who doesn't know she's dead-he and his mentor plan to find her killers. But Simon's not prepared for the nefarious plot that unfolds before him, involving politically correct cultists, a large wooden fish, a homicidal bookcase, and the forces of Darkness, which kind of have a crush on him.

Anton Strout is the author of the Spellmason Chronicles and the Simon Canderous series. He was born in the Berkshire Hills, mere miles from writing heavyweights Nathaniel Hawthorne and Herman Melville. He currently lives in historic Jackson Heights, New York (where nothing paranormal ever really happens, he assures you). In his scant spare time, he is an always writer, a sometimes actor, sometimes musician, occasional RPGer, and the world's most casual and controller-smashing video gamer. He currently works in the exciting world of publishing and, yes, it is as glamorous as it sounds.

"Simon Canderous is a reformed thief and a psychometrist. By turns despondent over his luck with the ladies (not always living) and his struggle with the hierarchy of his mysterious department (not always truthful), Simon's life veers from crisis to crisis. Following Simon's adventures is like being the pinball in an especially antic game, but it's well worth the wear and tear."
--Charlaine Harris

"Urban fantasy with a wink and a nod. Anton Strout has written a good- hearted send-up of the urban fantasy genre. Dead To Me is a genuinely fun book with a fresh and firmly tongue-in-cheek take on the idea of paranormal police. The laughs are frequent as are the wry smiles. I'm looking forward to seeing what he does next."
- Kelly McCullough, author of Cybermancy, Webmage and Codespell

"Part Ghostbusters, part Men-in-Black, StroutÆs debut is both dark and funny, with quirky characters, an eminently likable protagonist, and the comfortable, familiar voice of a close friend. His mix of (mostly) secret bureaucratic bickering and offbeat action shows New York like weÆve never seen it before. Make room on the shelf, Æcause youÆre going to want to keep this one!"
-Rachel Vincent, author of Stray and Rogue