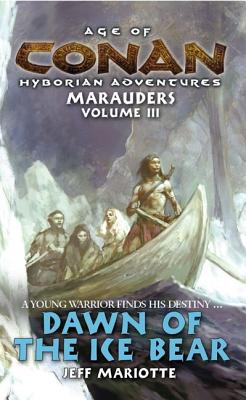 By Jeff Mariotte
Email or call for price.
Special Order

The young Pictish warrior Kral, aided by his loyal cadre of friends, sails to the sinister and dangerous realm of Stygia, on the trail of the stolen holy relic that could save his people--the Teeth of the Ice Bear. Yet even after enduring perils beyond their darkest dreams, they find that part of their prize is missing--stolen by the duplicitous warrior-thief, Conor.

Journeying into the heart of the Cimmerian wilderness in the dead of winter, Kral and his companions search for their traitorous former comrade even as the enraged Picts wage a desperate, doomed war against the great King Conan himself.

Beset by enemies on all fronts, Kral must fight for possession of the Teeth of the Ice Bear if he is to save his people from utter annihilation, and claim a destiny he never could have dreamed of...