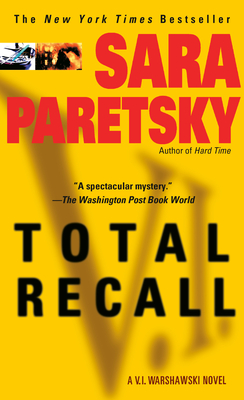 This is book number 10 in the V. I. Warshawski series.

NEW YORK TIMES BESTSELLER • “A spectacular mystery—complex, fast-paced yet ruminative, and imbued with the grim awareness, shared by all intelligent hard-boiled novels, that the past always catches up with us . . . a thrilling and even moving mystery.”—The Washington Post Book World

V.I.’s journey begins with a national conference in downtown Chicago, where angry protesters are calling for the recovery of Holocaust assets. Replayed on the evening news is the scene of a slight man who has stood up at the conference to tell an astonishing story of a childhood shattered by the Holocaust — a story that has devastating consequences for V.I.’s cherished friend and mentor, Lotty Herschel.

Lotty was a girl of nine when she emigrated from Austria to England, one of a group of children wrenched from their parents and saved from the Nazi terror just before the war broke out. Now stunningly—impossibly—it appears that someone from that long-lost past may have returned.

With the help of a recovered-memory therapist, Paul Radbuka has recently learned his true identity. But is he who he claims to be? Or is he a cunning impostor who has usurped someone else’s history . . . a history Lotty has tried to forget for over fifty years?

As a frightened V.I. watches her friend unravel, she sets out to help in the only way she can: by investigating Radbuka’s past. Already working on a difficult case for a poor family cheated of their life insurance, she tries to balance Lotty’s needs with her client’s, only to find that both are spiraling into a whirlpool of international crime that stretches from Switzerland and Germany to Chicago’s South Side.

As the atrocities of the past reach out to engulf the living, V.I. struggles to decide whose memories of a terrible war she can trust, and moves closer to a chilling realization of the truth—a truth that almost destroys her oldest friend.

“[A] master of the mystery format, Paretsky skillfully expands the form to tackle several convergent themes in a moving novel of discovery and redemption.... Dark, absorbing, probing — Paretsky’s novel explores the complex web of degrees of guilt and complicity surrounding the fate of Holocaust victims and survivors, with Lotty’s story emerging with compelling, terrible clarity and inevitability.”
— Publishers Weekly, starred review