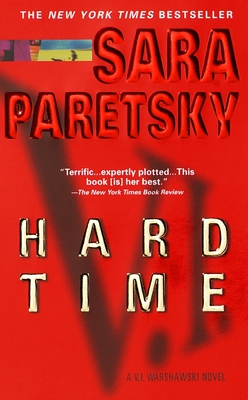 This is book number 9 in the V. I. Warshawski series.

NEW YORK TIMES BESTSELLER • “When it comes to creating character, evoking place, and writing crackling and convincing dialogue, Sara Paretsky has no peer—and Hard Time proves it once again.”—Chicago Tribune

In an instant, the lives of two women collided. One was behind the wheel of a Trans Am she liked to drive too fast. The other was lying in the road, dying an agonizing death. When Chicago private eye V.I. Warshawski got out of her car to look at the woman she almost hit, she began a long, harrowing descent into a world of shadowy secrets and tangled lives—and into the darkest heart of her city.

In Hard Time, which heralds the triumphant return of the much-loved heroine V.I. Warshawski, Sara Paretsky revisits the gritty urban landscape she illuminates with brilliant compassion and vivid color. For as V.I. unravels the mystery of a battered and discarded woman, she moves through circles of the rich and the troubled, into the bitter home of a powerful Chicago family, into the pampered world of a TV star, and behind the razor wire of a women’s prison. What V.I. finds is a web of conspiracy—and explosive secrets hidden in the darkest places of all. . . .

”You’ll feel handcuffed to this book until you’ve finished—probably at 3 a.m.”—The Denver Post

Sara Paretsky is the author of many novels, including her V. I. Warshawski series, which began with Indemnity Only. She lives in Chicago