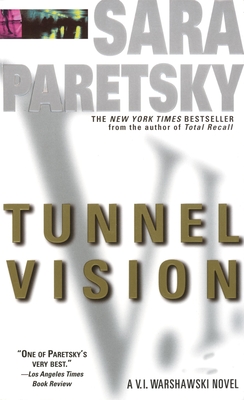 This is book number 8 in the V. I. Warshawski series.

NEW YORK TIMES BESTSELLER • “ The best of Sara Paretsky’s mystery novels . . . all of [Sara] Warshawski’s feminist and liberal proclivities are in full boil, propelling a complex and action-filled plot.”

Stubbornness has landed private eye V.I. Warshawski in big trouble at her Chicago office. With her grand old Loop building set to be razed, she’s become a hold-out tenant amid frayed wiring and scary, empty corridors. Then she finds a homeless woman with three kids in the basement, and before she can rescue them, they disappear. Worst of all, she’s been implicated in a murder—after the body of Deirdre Messenger, a prominent lawyer’s wife, turns up sprawled across her desk.

V.I., who had volunteered with Deirdre at a women’s shelter, suspects her death is linked to a case of upper-class domestic abuse so slickly concealed that the police refuse to believe it. Increasingly at odds with the cops, V.I. is blindly plunging ahead after the truth. And her path may lead to corruption at the highest levels.or deep into the abandoned tunnels beneath Chicago’s streets, where secrets are hiding in the dark like a child’s—or V.I.’s—worst nightmare.