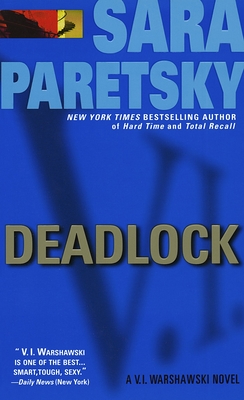 This is book number 2 in the V. I. Warshawski series.

“Sara Paretsky makes excellent use of local backgrounds in a carefully plotted tale of murder and great misdeeds in the world of Great Lakes cargo shipping.”—Chicago Tribune

When Chicago Black Hawks hockey legend Boom Boom Warshawski slips off a wharf and drowns in Lake Michigan, his private-eye cousin questions the accidental death report and rumors of suicide. Armed with a bottle of Black Label and a Smith & Weson, V.I. follows a trail of violence and corruption to the center of the Windy City's powerful shipping industry. Dodging elaborate attempts on her life with characteristic grit and humor, the one-of-a-kind detective wends her way through a maze of grain elevators and thousand-ton freighters, ruthless businessmen and gorgeous ballerinas, to ferret out Boom Boom's killers before they phase her out of the picture—permanently.