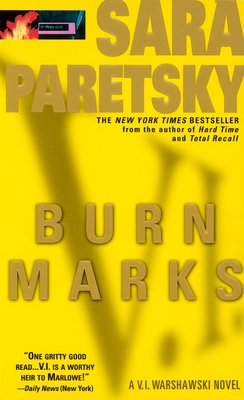 This is book number 6 in the V. I. Warshawski series.

NEW YORK TIMES BESTSELLER • “Another triumph for Ms. Paretsky, her most captivating novel yet . . . V.I. herself [is] undoubtedly one of the best-written characters in mystery fiction.”—The Baltimore Sun

Someone knocking on the door at 3 A.M. is never good news. For V.I. Warshawski, the bad news arrives in the form of her wacky, unwelcome aunt Elena. The fire that has just burned down a sleazy SRO hotel has brought Elena to V.I.’s doorstep. Uncovering an arsonist—and the secrets hidden behind Elena’s boozy smile—will send V.I. into the seedy world of Chicago’s homeless . . . into the Windy City’s backroom deals and bedroom politics, where new schemers and old cronies team up to get V.I. off the case—by hook, by crook, or by homicide.