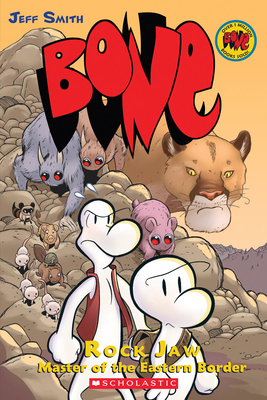 This is book number 5 in the Bone series.

Trying to return a rat creature cub to the mountains, Fone & Smiley Bone encounter yet another adversary: the sly and mighty mountain lion, Rock Jaw.

In this fifth volume of the BONE saga, Fone and Smiley Bone strike out into the wilderness to return a lost rat creature cub to the mountains. It doesn't take long before they run smack into Rock Jaw, "Master of the Eastern Border," an enormous mountain lion with a none-too-friendly disposition. Life gets even more complicated when they befriend a group of baby animals who are being orphaned by rat creature attacks. Everything comes to a head in an earth-shattering clash between Rock Jaw and Kingdok, the leader of the rat creatures.

Jeff Smith is the creator of the award-winning, NEW YORK TIMES bestselling BONE series. He was born and raised in the American Midwest and learned about cartooning from comic strips, comic books, and TV animation. Visit him online at www.boneville.com.