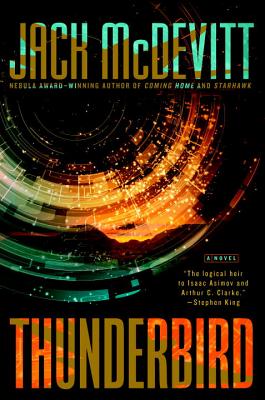 By Jack McDevitt
Unavailable to Order
Hard to Find

The Nebula Award–winning author of the Alex Benedict novels and the Priscilla Hutchins novels returns to the world of Ancient Shores in a startling and majestic epic.

A working stargate dating back more than ten thousand years has been discovered in North Dakota, on a Sioux reservation near Devils Lake. Travel through the gate currently leads to three equally mysterious destinations: (1) an apparently empty garden world, quickly dubbed Eden; (2) a strange maze of underground passageways; or (3) a space station with a view of a galaxy that appears to be the Milky Way.

The race to explore and claim the stargate quickly escalates, and those involved divide into opposing camps who view the teleportation technology either as an unprecedented opportunity for scientific research or a disastrous threat to national—if not planetary—security. In the middle of the maelstrom stands Sioux chairman James Walker. One thing is for certain: Questions about what the stargate means for humanity’s role in the galaxy cannot be ignored.

Especially since travel through the stargate isn’t necessarily only one way...

Jack McDevitt is a former naval officer, taxi driver, English teacher, customs officer, and motivational trainer, and is now a full-time writer. He is the author of the Alex Benedict novels, including Coming Home and Firebird; and the Priscilla Hutchins novels, including Starhawk.. His novel Seeker won a Nebula Award, and he is a multiple Nebula Award finalist. He lives in Georgia with his wife, Maureen.

“‘Why read Jack McDevitt?’ The question should be: ‘Who among us is such a slow pony that s/he isn’t reading McDevitt?’”—Harlan Ellison

“An intelligent, provocative entertainment by a man who brings energy, style, and a fresh perspective to everything he writes.”—The Washington Post Book World