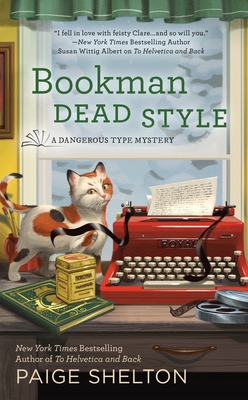 This is book number 2 in the A Dangerous Type Mystery series.

A movie star is typecast as a killer in the second Dangerous Type Mystery from the New York Times bestselling author of To Helvetica and Back.

It’s January, and the Star City Film Festival has taken the Utah ski resort town by storm. Movie stars are everywhere, carving fresh powder on the slopes and crossing the thresholds of Bygone Alley’s charming boutique shops—including The Rescued Word, where Clare Henry and her grandfather restore old typewriters and beloved books. When cinema’s hottest superhero, Matt Bane, enters their store to buy some personalized notecards, it’s hard not to be starstruck.

But when Clare sees the police leading Matt out of The Fountain hotel in handcuffs only a few hours later, she can’t believe her eyes. The affable actor is accused of killing his sister, but Clare’s convinced he’s wrong for that role. Now it’s open call for suspects as Clare tries to reel in the killer before another victim fades to black...

Paige Shelton is the New York Times bestselling author of To Helvetica and Back, the debut novel in the Dangerous Type Mysteries. She also pens the Farmers’ Market Mysteries, including Bushel Full of Murder and Merry Market Murder, and the Country Cooking School Mysteries, including If Onions Could Spring Leeks and If Catfish Had Nine Lives.

Praise for To Helvetica and Back

“Will intrigue you from A to Z and then some...I fell in love with feisty Clare and her Rescued Word from the first broken ‘L’—and so will you...Paige Shelton has come up with a unique combination of characters and setting.”—Susan Wittig Albert, New York Times bestselling author

“Clare is a charming protagonist who loves her work. The minor characters and subplots accelerated the novel's pace to add intrigue and suspense...I love cozy mysteries that are fast paced, riveting and intriguing, filled with exciting characters. To Helvetica and Back fits that bill nicely, and I can't wait to read future releases in this great, exciting and loveable new series.”—MyShelf.com

“I really like Clare, Jodie, Chester and Baskerville (the shop cat) as well as the side characters. Seth and Mutt look to be keepers...Shelton also writes the Farmer’s Market series and the Country Cooking School mysteries. I think I’ve found a new favorite!”—Kings River Life Magazine