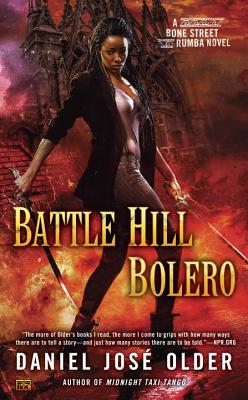 This is book number 3 in the Bone Street Rumba series.

In the third in the “richly detailed and diverse” (io9) urban fantasy series, the time has come for the dead to rise up against the shady powers-that-be...

The time has come for the dead to rise up...

Trouble is brewing between the Council of the Dead and the ghostly, half-dead, spiritual, and supernatural community they claim to represent. One too many shady deals have gone down in New York City’s streets, and those caught in the crossfire have had enough. It’s time for the Council to be brought down—this time for good.

Carlos Delacruz is used to being caught in the middle of things: both as an inbetweener, trapped somewhere between life and death, and as a double agent for the Council. But as his friends begin preparing for an unnatural war against the ghouls in charge, he realizes that more is on the line than ever before—not only for the people he cares about, but for every single soul in Brooklyn, alive or otherwise...

“Fans of gritty urban fantasy and earthy characters will celebrate this satisfying conclusion to a unique series.”—Publishers Weekly

“An exciting and fast paced end to the Bone Street Rumba trilogy...I’ve never read a series that does such a good job having characters of multiple races, genders, religions and sexual identities.”—Night Owl Paranormal

“The more of Older’s books I read, the more I come to grips with how many ways there are to tell a story—and just how many stories there are to be told.”—NPR.org

“A damn good read...takes aim at a whole bunch of familiar targets and hits them hard in new and interesting ways.”—Simon R. Green, New York Times bestselling author of the Secret Histories Novels

“Simply put, Daniel José Older has one of the most refreshing voices in genre fiction today.”—Saladin Ahmed, author of The Thousand and One

“As real as fresh blood and as hard as its New York streets. A Lou Reed song sung with a knife to your throat.”—Richard Kadrey, New York Times bestselling author of the Sandman Slim Novels