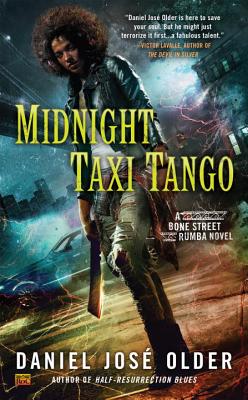 This is book number 2 in the Bone Street Rumba series.

The streets of New York are hungry tonight...

Carlos Delacruz straddles the line between the living and the not-so alive. As an
agent for the Council of the Dead, he eliminates New York’s ghostlier problems. This time it’s a string of gruesome paranormal accidents in Brooklyn’s Von King Park that has already taken the lives of several locals—and is bound to take more.

The incidents in the park have put Kia on edge. When she first met Carlos, he was the weird guy who came to Baba Eddie's botánica, where she worked. But the closer they’ve gotten, the more she’s seeing the world from Carlos’s point of view. In fact, she’s starting to see ghosts. And the situation is far more sinister than that—because whatever is bringing out the dead, it’s only just getting started.

“Daniel José Older is here to save your soul. But he might just terrorize it first…a fabulous talent.”—Victor LaValle, author of The Devil in Silver

“All the best dark urban fantasies are about matters of life and death. Half-Resurrection Blues takes that to the limit. A hard-core, hard-driving fantasy.”—Simon R. Green, New York Times Bestselling Author of Tales from the Nightside

“As real as fresh blood and as hard as its New York streets. A Lou Reed song sung with a knife to your throat.”—Richard Kadrey, New York Times Bestselling Author of The Getaway God

“A fantastic beginning to what will surely be a fantastic series."—Jesmyn Ward, National Book winning author of Men We Reaped