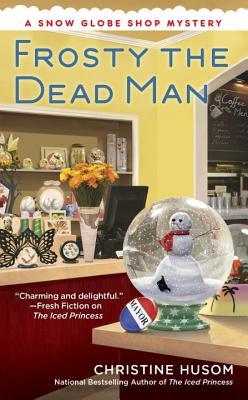 This is book number 3 in the A Snow Globe Shop Mystery series.

A snow globe becomes a murder weapon in this chilling cozy mystery in the Snow Globe Shop series.

Mayor Lewis Frost has always been known as Frosty to his friends—not that he has many these days. Controversies swirling around the city council have members wondering if Frosty is trying to snow them. After one councilman storms off in a huff, the mayor turns to curio shop manager Camryn Brooks and asks her to consider taking a seat on the council.

Later, when Cami goes to his office to discuss the proposal, her blood runs cold. She finds Frosty dead, and the very snow globe she sold him earlier that day lies in sparkling shards on his carpet—along with a large diamond. Does the snow globe—which features a peculiar tableau of an armed man and three menacing bears—hold a clue to Frosty’s demise? One way or another, it’s up to Cami to shake things up before the killer’s trail goes cold...

Christine Husom is the national bestselling author of the Snow Globe Shop Mysteries, as well as the Winnebago County Mysteries, also set in central Minnesota. She served with the Wright County Sheriff’s Department and trained with the St. Paul Police Department, where she gained firsthand knowledge of law enforcement procedures. She was nominated for the Minnesota Book Award in 2010, 2012, 2013, and 2015, and the Independent Publisher Book Award in 2009 and 2012. She is a member of the Mystery Writers of America and the National Sisters in Crime, and is active with the Twin Cities Sisters in Crime.

Praise for Snow Way Out

“A promising debut! Delights with charming characters, lots of heart, and a clever whodunit.”—Christy Fifield, national bestselling author of Murder Ties the Knot

“Snow Way Out is everything I love in a cozy mystery...[This series is] off to a magnificent start. Christine Husom’s unique storyline using characters who own a snow globe shop and joint coffee shop is one that is different than most I have read and it works...an absolutely delightful story to cozy up on the couch with.”—Fresh Fiction

“This was a wonderful debut to a promising new series...I look forward to spending more time with this great cast of characters.”—Mochas, Mysteries and Meows

“This is a pleasantly appealing and delightfully charming addition to the cozy mystery genre, and I can’t wait for my next visit to Brooks Landing.”—Dru’s Book Musings