The End of Magic (An Echo Park Coven Novel #3) (Paperback) 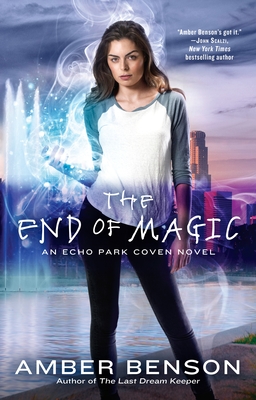 This is book number 3 in the An Echo Park Coven Novel series.

In the third in the “spellbinding” (Seanan McGuire) series from the author of the Calliope Reaper-Jones novels, magic has been loosed upon the world—and the consequences could destroy all of humanity, magical and non-magical alike...

Lyse MacAllister used to be like everyone else—blissfully ignorant of magic, of the dire battles being fought in shadows and secrecy. But that was before her great-aunt Eleanora died, leaving her in control of the Echo Park coven; before she found herself in the middle of the witches’ clash with the anti-magic zealots known as The Flood; before her blood sisters lost their faith in her.

As The Flood begins turning humans across the globe against the witches, Lyse must find a way to regain the trust of her former magical family and once again unify them. Because the final battle between good and evil is looming—and if the witches don’t stand together, all of humankind could be lost...

AMBER BENSON is the author of the Echo Park Coven Novels, including The Last Dream Keeper and The Witches of Echo Park, and the Calliope Reaper-Jones Novels, including The Golden Age of Death and How To Be Death. She cocreated, cowrote, and directed the animated supernatural Web series Ghosts of Albion with Christopher Golden, which they followed with a series of novels, including Witchery and Accursed, and the novella Astray. Benson and Golden also coauthored the novella The Seven Whistlers. As an actress, she has appeared in dozens of roles in feature films, TV movies, and television series, including the fan-favorite role of Tara Maclay on three seasons of Buffy the Vampire Slayer. Benson wrote, produced, and directed the feature films Chance and Lovers, Liars and Lunatics.

“[An] urban fantasy series that deftly mixes magic and the modern world.”—Publishers Weekly