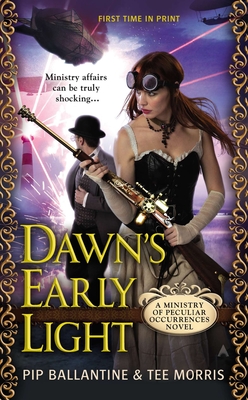 This is book number 1 in the A Peculiar Occurrences Novel series.

Working for the Ministry of Peculiar Occurrences, one sees innumerable technological wonders. But even veteran agents Braun and Books are unprepared for what the electrifying future holds in the third novel in the steampunk adventure series.

After being ignominiously shipped out of England following their participation in the Janus affair, Braun and Books are ready to prove their worth as agents. But what starts as a simple mission in the States—intended to keep them out of trouble—suddenly turns into a scandalous and convoluted case that has connections reaching as far as Her Majesty the Queen.

Even with the help of two American agents from the Office of the Supernatural and the Metaphysical, Braun and Books have their work cut out for them as their chief suspect in a rash of nautical and aerial disasters is none other than Thomas Edison. Between the fantastic electric machines of Edison, the eccentricities of MoPO consultant Nikola Tesla, and the mysterious machinations of a new threat known only as the Maestro, they may find themselves in far worse danger than they ever have been in before…

Philippa (Pip) Ballantine is the author of the Book of the Order series, the Shifted World series, the Chronicles of Art series, and—with Tee Morris—the coauthor of the Ministry of Peculiar Occurrences series. Her podcast of Chasing the Bard won the Sir Julius Vogel Award in 2009, and two of her novels have been short-listed for it. Originally from New Zealand, she now resides in Virginia with her husband, her daughter, and a mighty clowder of cats.

Tee Morris is the author of Morevi: The Chronicles of Rafe and Askana and the co-author of the Ministry of Peculiar Occurrences novels. In addition to his work as a fantasist, he is also a social media pioneer and the author of Podcasting for Dummies and All a Twitter.

Praise for the Ministry of Peculiar Occurrences novels

“Cute and charming, interspersed with sequences of dire peril and explosive action...You don’t want to miss a delicious moment of the story.”—Kings River Life

“[A] thrilling and labyrinth detective romp laced with humor, feminine moxie, and mayhem. The prose is Dickens on steroids, yet it somehow grips the reader...A dark and twisted roller coaster of a read for those fond of elegant vernacular and bizarre weaponry.”—Fangoria

“Anyone who was a fan of the adventure in the Blades of the Rose series and the dynamic in the Sherlock Holmes movie might want to check this series out.”—Fiction Vixen Book Reviews

“This is steampunk done right, down to every last detail...Action-packed with edge-of-your-seat excitement.”—Badass Book Reviews

“[A] rollicking adventure series of the finest order.”—The Ranting Dragon