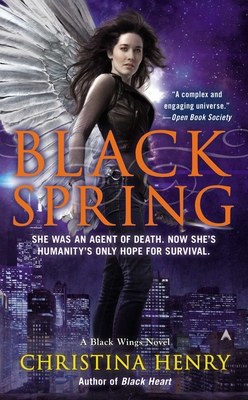 This is book number 7 in the A Black Wings Novel series.

A former Agent of death, Madeline Black now has everything to live for, most importantly, her unborn child. But Chicago has become ground zero in a struggle between ancient creatures, and only Maddy can stop the carnage…

The mayor of Chicago has announced a plan to round up the city’s supernatural beings and put them in camps. With her due date looming, Maddy’s best move would be to lay low for a while. But not everyone is willing to respect her privacy. Hounded by tentacled monsters, a rogue shapeshifter, and a tenacious blogger, Maddy turns to her most powerful ally, her uncle Daharan, only to find him missing.

Just when it seems like things can’t get any worse, Maddy gets an invitation in the mail—to Lucifer’s wedding. Turns out everyone has been invited, friends and enemies alike. And with that kind of guest list, it’s highly unlikely there will be a happily ever after.

Christina Henry is a graduate of Columbia College Chicago and enjoys running long distances, reading anything she can get her hands on and watching movies with subtitles in her spare time. Christina used to work in a comic-book store and, as a result, has boxes of bagged and boarded comics in her attic. Needless to say, she can hold her own in a conversation about manga and anime. She lives in Chicago with her husband and son.

Praise for the Black Wings novels:

“A fast-paced, spine-tingling, adventure ride that won’t let you go till the end.”—Fresh Fiction

“Secrets and revelations of the most awesome and diabolical kind.”—My Bookish Ways