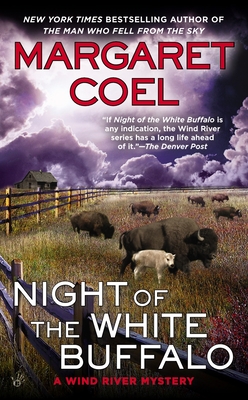 This is book number 18 in the A Wind River Mystery series.

A mysterious penitent confesses to murder, and then flees the confessional before Father John can identify him. Two months later, Vicky discovers rancher Dennis Carey shot dead in his truck along Blue Sky Highway. With the tragic news comes the exposure of an astonishing secret: the most sacred creature in Native American mythology, a white buffalo calf, was recently born on Carey’s ranch.

The miraculous animal draws a flood of pilgrims to the reservation, frustrating Vicky and Father John’s already difficult investigation as they try to unravel the strange events surrounding both Carey’s murder and the recent disappearances of three cowboys from his ranch.

It could be coincidence, given a cowboy’s nomadic life, but Vicky doesn’t believe in coincidences. And at the back of Father John’s mind is the voice from the man in the confessional: I killed a man…

“Night of the White Buffalo is as fresh as any of the Boulder author’s other books. In fact, Coel’s work has a maturity that comes from years of honing the writing craft.”—The Denver Post

“Fans of the Wind River Mystery series will find Night of the White Buffalo hard to put down. With well-developed characters and evocative descriptions, this eighteenth installment in the series is another example of Coel’s prowess as a writer. Once again, authentic dialogue combines with historical fact to create an authentic, exciting read.”—Examiner.com

“Compelling…Coel deftly inscribes Arapaho tradition and culture into the Western landscape, portraying both the grace and the squalor of reservation life.”—Publishers Weekly