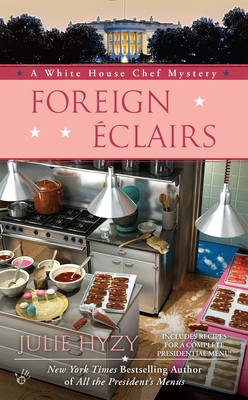 This is book number 9 in the A White House Chef Mystery series.

White House executive chef Ollie Paras has served plenty of meals to foreign dignitaries from around the world. But someone is ready to serve her an ice-cold dish of revenge...

Things are about to really heat up for Ollie. News of a bombing and attempted breakout at a federal prison reveals that the brother of a terrorist she helped defeat is back with a vengeance. And after she gets mugged on her way home from work, the Secret Service won’t leave her side, fearing she is now a target.

When a White House staff member is murdered, officials rush to action over a possible security breach. It may be time for Ollie to trade in her apron for a bullet-proof vest as she becomes part of a bold strategy to make sure this terrorist gets his just desserts...