The Darling Dahlias and the Eleven O'Clock Lady (Hardcover) 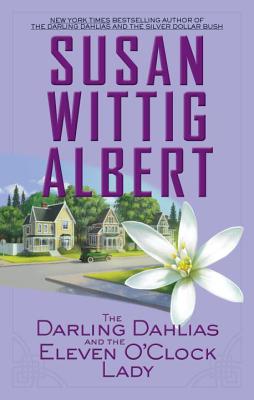 By Susan Wittig Albert
Unavailable to Order
Hard to Find

This is book number 6 in the Darling Dahlias series.

New York Times bestselling author Susan Wittig Albert transports readers to the summer of 1934, when a sensational murder shakes up the small Southern town of Darling, Alabama—and pulls in the ladies of the Darling Dahlias’ garden club, who never let the grass grow under their feet when there’s a mystery to solve…

The eleven o’clock lady has always been one of garden club president Liz Lacy’s favorite spring wildflowers. The plant is so named because the white blossoms don’t open until the sun shines directly on them and wakes them up.

But another Eleven O’Clock Lady is never going to wake up again. Rona Jean Hancock—a telephone switchboard operator who earned her nickname because her shift ended at eleven, when her nightlife was just beginning—has been found strangled with her own silk stocking in a very unladylike position.

Gossip sprouts like weeds in a small town, and Rona Jean’s somewhat wild reputation is the topic of much speculation regarding who might have killed her. As the Darling Dahlias begin to sort through Rona Jean’s private affairs, it appears there may be a connection to some skullduggery at the local Civilian Conservation Corps camp. Working at the camp, garden club vice president Ophelia Snow digs around to expose the truth…before a killer pulls up stakes and gets away with murder.

Susan Wittig Albert grew up on a farm in Illinois and earned her Ph.D. at the University of California at Berkeley. A former professor of English and a university administrator and vice president, she is the New York Times bestselling author of the China Bayles Mysteries, the Darling Dahlias Mysteries, and the Cottage Tales of Beatrix Potter. Some of her recent titles include Death Come Quickly, Widow’s Tears, The Darling Dahlias and the Silver Dollar Bush, and The Tale of Castle Cottage. She and her husband, Bill, coauthor a series of Victorian-Edwardian mysteries under the name Robin Paige, which includes such titles as Death at Glamis Castle and Death at Whitechapel.

Praise for the Darling Dahlias Mysteries

“Albert once again tells a sweet story laced with personable characters and a strong sense of time and place. Readers can always bank on the talented author for a terrific tale.”—Richmond Times-Dispatch

“The author of the popular China Bayles mysteries brings a small Southern town to life and vividly captures an era and culture—the Depression, segregation, class differences, the role of women in the South—with authentic period details. Her book fairly sizzles with the strength of the women of Darling.”—Library Journal

“This sweet book captures the true tone of a small town.”—The Times-Picayune

“Captivating…Charming characters, a fast-paced plot, and a strong sense of history help make this a superior cozy.”—Publishers Weekly