The Kingdom (A Sam and Remi Fargo Adventure #3) (Paperback) 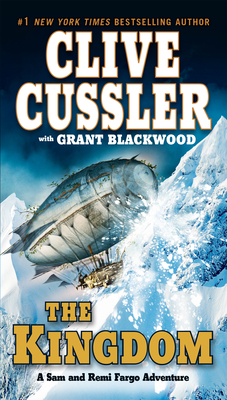 This is book number 3 in the A Sam and Remi Fargo Adventure series.

Husband-and-wife team Sam and Remi Fargo must use their instinct for treasure-hunting to find a missing person in this novel in the #1 New York Times-bestselling series.

The Fargos are used to hunting for fortune, not people. But then a Texas oil baron contacts them with a personal plea: an investigator friend of the Fargos' was on a mission to find the oil baron's missing father-and now the investigator is missing, too. Would Sam and Remi be willing to look for them both? Though something about the situation doesn't quite add up, the Fargos agree to go on the search.

What they find will be beyond anything they could have imagined. On a journey that will take them to Tibet, Nepal, Bulgaria, India, and China, the Fargos will find themselves embroiled with black-market fossils, a centuries-old puzzle chest, the ancient Tibetan kingdom of Mustang, a balloon aircraft from a century before its time...and a skeleton that could turn the history of human evolution on its head.

Packed with the endless imagination and breathtaking suspense that are his hallmarks, The Kingdom once again proves that Clive Cussler is "just about the best storyteller in the business" (New York Post).

Clive Cussler is the author of more than fifty books in five bestselling series, including Dirk Pitt, NUMA Files, Oregon Files, Isaac Bell, and Fargo. His life nearly parallels that of his hero Dirk Pitt. Whether searching for lost aircraft or leading expeditions to find famous shipwrecks, he and his NUMA crew of volunteers have discovered more than seventy-five lost ships of historic significance, including the long-lost Confederate submarine Hunley, which was raised in 2000 with much press publicity. Like Pitt, Cussler collects classic automobiles. His collection features more than eighty examples of custom coachwork. Cussler lives in Arizona and Colorado.

Grant Blackwood is the author of the Briggs Tanner series, as well as the coauthor of #1 New York Times bestseller Dead or Alive, with Tom Clancy, and The Kill Switch, with James Rollins. A U.S. Navy veteran, he spent three years on active duty aboard the guided missile frigate USS Ford as an Operations Specialist and a Pilot Rescue Swimmer. He caught the fiction-writing bug at the age of eighteen while reading Clive Cussler’s The Mediterranean Caper.

“A new Clive Cussler novel is like a visit from your best friend." — Tom Clancy