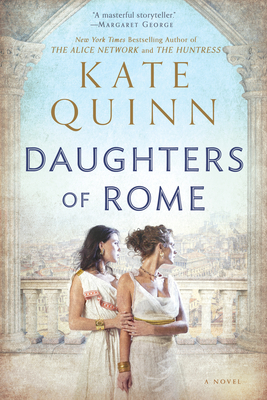 This is book number 2 in the Empress of Rome series.

A fast-paced historical novel about two women with the power to sway an empire, from the New York Times and USA Today bestselling author of The Alice Network and The Diamond Eye.

A.D. 69. The Roman Empire is up for the taking. Everything will change—especially the lives of two sisters with a very personal stake in the outcome.

Elegant and ambitious, Cornelia embodies the essence of the perfect Roman wife. She lives to one day see her loyal husband as Emperor. Her sister Marcella is more aloof, content to witness history rather than make it. But when a bloody coup turns their world upside-down, both women must maneuver carefully just to stay alive. As Cornelia tries to pick up the pieces of her shattered dreams, Marcella discovers a hidden talent for influencing the most powerful men in Rome. In the end, though, there can only be one Emperor...and one Empress.

Kate Quinn is a native of Southern California. She attended Boston University, where she earned a bachelor's and master's degree in Classical Voice. A lifelong history buff, she has written four novels in the Empress of Rome Saga and two Novels of the Borgias, before moving to the twentieth century with The Alice Network and The Huntress. All her books have been translated into multiple languages.

Praise for Daughters of Rome

“A soap opera of biblical proportions...[Quinn] juggles protagonists with ease and nicely traces the evolution of Marcella—her most compelling character—from innocuous historian to manipulator. Readers will become thoroughly immersed in this chaotic period of Roman history.”—Publishers Weekly

“A fascinating view of four women during the year of the four emperors...Regardless of whether you already have an interest in Roman history, Daughters of Rome will fascinate you from beginning to end.”—Book Loons