A Shadow Bright and Burning (Kingdom on Fire, Book One) (CD-Audio) 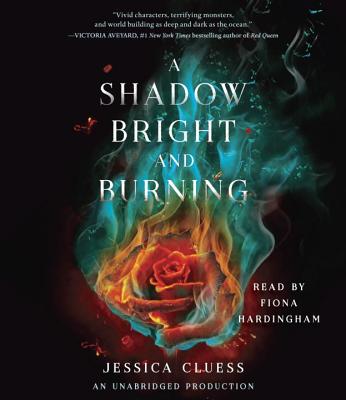 By Jessica Cluess, Fiona Hardingham (Read by)
Unavailable to Order
Hard to Find

This is book number 1 in the Kingdom on Fire series.

I am Henrietta Howel.
The first female sorcerer in hundreds of years.
The prophesied one.
Or am I?

Henrietta Howel can burst into flames.
Forced to reveal her power to save a friend, she's shocked when instead of being executed, she's invited to train as one of Her Majesty's royal sorcerers.

Thrust into the glamour of Victorian London, Henrietta is declared the chosen one, the girl who will defeat the Ancients, bloodthirsty demons terrorizing humanity. She also meets her fellow sorcerer trainees, handsome young men eager to test her power and her heart. One will challenge her. One will fight for her. One will betray her.

But Henrietta Howel is not the chosen one.
As she plays a dangerous game of deception, she discovers that the sorcerers have their own secrets to protect. With battle looming, what does it mean to not be the one? And how much will she risk to save the city—and the one she loves?

"The magic! The intrigue! The guys! We were sucked into this monster-ridden, alternative England from page one. Henrietta is literally a 'girl on fire' and this team of sorcerers training for battle had a pinch of Potter blended with a drop of [Cassandra Clare's] Infernal Devices."
--Justine Magazine

"Unputdownable. I loved the monsters, the magic, and the teen warriors who are their world's best hope! Jessica Cluess is an awesome storyteller!"
--Tamora Pierce, #1 New York Times bestselling author

"Pure enchantment. I love how Cluess turned the 'chosen one' archetype on its head. With the emotional intensity of my favorite fantasy books, this is the kind of story that makes you forget yourself."
--Roshani Chokshi, New York Times bestselling author of The Star-Touched Queen

"A glorious, fast-paced romp of an adventure. Jessica Cluess has built her story out of my favorite ingredients: sorcery, demons, romance, and danger."
--Kelly Link, author of Pretty Monsters

JESSICA CLUESS is a writer, a graduate of Northwestern University, and an unapologetic nerd. After college, she moved to Los Angeles, where she served coffee to the rich and famous while working on her first novel. When she's not writing books, she's an instructor at Writopia Lab, helping kids and teens tell their own stories. Visit her at jessicacluess.com and follow her on Twitter at @JessCluess.

"Is it clear that Cluess adores the Harry Potter series and Jane Eyre? Yes. So do you. So does everyone. What matters is that her voice is her own. . . . A Shadow Bright and Burning delivers on the promise of its title. This is a novel that gives off light and heat."
—The New York Times

"Henrietta is pragmatic and bitingly funny, and she more than holds her own in a man’s world. Cluess gamely turns the chosen-one trope upside down in this smashing dark fantasy."
—Publishers Weekly, starred review

"Jessica Cluess manages to hook the reader on the very first page. . . . The pages turn quickly and this first installment in the story is over before the reader will want it to be. The ending is perfect, too. Just enough of a conclusion to be satisfying, but also enough mystery to make readers anxious to see the next installment. Lovely debut novel by a talented writer."
—Huffington Post