Exit, Pursued by a Bear (CD-Audio) 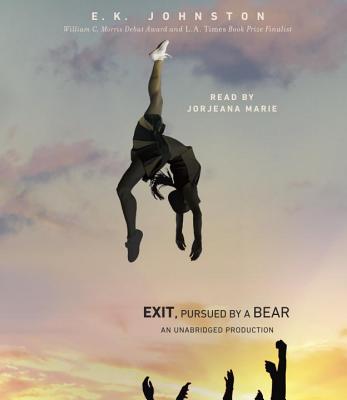 By E.K. Johnston, Jorjeana Marie (Read by)
Unavailable to Order
Hard to Find

From #1 New York Times bestselling author E.K. Johnston comes a brave and unforgettable story that will inspire readers to rethink how we treat survivors.

Hermione Winters is captain of her cheerleading team, and in tiny Palermo Heights, this doesn’t mean what you think it means. At PHHS, the cheerleaders don't cheer for the sports teams; they are the sports team—the pride and joy of a small town. The team's summer training camp is Hermione's last and marks the beginning of the end of…she’s not sure what. She does know this season could make her a legend. But during a camp party, someone slips something in her drink. And it all goes black.

In every class, there's a star cheerleader and a pariah pregnant girl. They're never supposed to be the same person. Hermione struggles to regain the control she's always had and faces a wrenching decision about how to move on. The rape wasn't the beginning of Hermione Winter's story and she's not going to let it be the end. She won’t be anyone’s cautionary tale.

"E.K. Johnston has a seemingly limitless range.... This is realistic fiction at it's best."—The Globe & Mail

★ "Johnston’s clever—but never precious—update of Shakespeare’s The Winter’s Tale is unflinching but not at all graphic in its treatment of sexual violence.... Middle and high school readers will pass this powerful, engaging story around and around."—Kirkus Reviews, starred review

★ "Fierce and gorgeously drawn, this is a rape story that doesn’t focus on victimhood."—Booklist, starred review

★ “A beautifully written portrait of a young woman facing the unthinkable, this is a must-buy for high school collections.”—SLJ, starred review

"Exit, Pursued by a Bear is an important new novel comparable with Speak by Laurie Halse Anderson.”—VOYA.

"This story of a cheerleader rising up after a traumatic event will give you Veronica Mars-level feels that will stay with you long after you finish."—Seventeen Magazine

E.K. Johnston is the #1 New York Times bestselling author of several YA novels, including the L.A. Times Book Prize finalist The Story of Owen and Star Wars: Ahsoka. Her novel A Thousand Nights was shortlisted for The Governor General's Award. The New York Times called The Story of Owen “a clever first step in the career of a novelist who, like her troubadour heroine, has many more songs to sing" and in its review of Exit, Pursued by a Bear, The Globe & Mail called Johnston "the Meryl Streep of YA," with "limitless range." E.K. Johnston lives in Stratford, Ontario. Follow her on Twitter at @ek_johnston.