Beneath a Meth Moon (Hardcover) 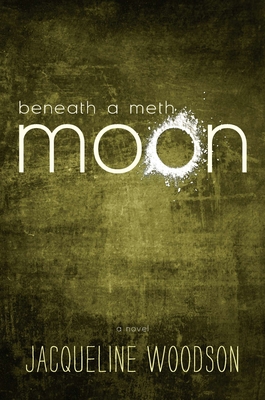 Laurel Daneau has moved on to a new life, in a new town, but inside she's still reeling from the loss of her beloved mother and grandmother after Hurricane Katrina washed away their home. Laurel's new life is going well, with a new best friend, a place on the cheerleading squad and T-Boom, co-captain of the basketball team, for a boyfriend. Yet Laurel is haunted by voices and memories from her past.

When T-Boom introduces Laurel to meth, she immediately falls under its spell, loving the way it erases, even if only briefly, her past. But as she becomes alienated from her friends and family, she becomes a shell of her former self, and longs to be whole again. With help from an artist named Moses and her friend Kaylee, she's able to begin to rewrite her story and start to move on from her addiction.

Incorporating Laurel's bittersweet memories of life before and during the hurricane, this is a stunning novel by one of our finest writers. Jacqueline Woodson's haunting - but ultimately hopeful - story is beautifully told and one readers will not want to miss.

Jacqueline Woodson (www.jacquelinewoodson.com) is the recipient of a 2020 MacArthur Fellowship, the 2020 Hans Christian Andersen Award, the 2018 Astrid Lindgren Memorial Award, and the 2018 Children’s Literature Legacy Award. She was the 2018–2019 National Ambassador for Young People’s Literature, and in 2015, she was named the Young People’s Poet Laureate by the Poetry Foundation. She received the 2014 National Book Award for her New York Times bestselling memoir Brown Girl Dreaming, which was also a recipient of the Coretta Scott King Award, a Newbery Honor, the NAACP Image Award, and a Sibert Honor. She wrote the adult books Red at the Bone, a New York Times bestseller, and Another Brooklyn, a 2016 National Book Award finalist. Born in Columbus, Ohio, Jacqueline grew up in Greenville, South Carolina, and Brooklyn, New York, and graduated from college with a B.A. in English. She is the author of dozens of award-winning books for young adults, middle graders, and children; among her many accolades, she is a four-time Newbery Honor winner, a four-time National Book Award finalist, and a three-time Coretta Scott King Award winner. Her books include Coretta Scott King Award winner Before the Ever After; New York Times bestsellers The Day You Begin and Harbor Me; The Other Side, Each Kindness, Caldecott Honor book Coming On Home Soon; Newbery Honor winners Feathers, Show Way, and After Tupac and D Foster; and Miracle's Boys, which received the LA Times Book Prize and the Coretta Scott King Award. Jacqueline is also a recipient of the Margaret A. Edwards Award for lifetime achievement for her contributions to young adult literature and a two-time winner of the Jane Addams Children's Book Award. She lives with her family in Brooklyn, New York.

* "Woodson crafts a story of powerful emotional intensity through her poignant portrayal of a young woman lost and in pain. The depiction of small-town life, with its Dollar Store, Wal-Mart and limited economic opportunities adds texture and authenticity. This is beautifully written, with clear prose that honors the story it tells. . . . Most of all, it is populated with fully realized characters who struggle to make sense of tragedy. . . . A moving, honest and hopeful story."—Kirkus Reviews, starred review

* "Dreamlike story . . . peppered with the voices of expertly sketched characters and rich with writerly observations. . . . Woodson maintains tension throughout, making it abundantly clear how easy it is to succumb to meth and how difficult it is to recover from it."—Publishers Weekly, starred review

"Woodson takes us on the dark journey of addiction, mimicking the slow, hazy spell of drug use with the lull of her poetic prose. . . . Laurel's descent is brutally honest. . . . An intimate and compelling story of survival."—The Horn Book

"As accurate as it is heartbreaking; readers will be deeply moved . . . they'll sympathize with [Laurel's] desire to find some way to feel better. . . . Readers looking to understand the attraction of a destructive substance will get a glimmer of understanding."—The Bulletin of the Center for Children’s Books

"Will not disappoint readers. . . . Ends on a hopeful note: perhaps it is possible to write pain 'into the past and leave some of it there,' and reimagine a future."—Booklist