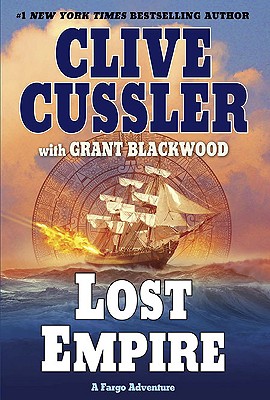 Sam and Remi Fargo, heroes of "Spartan Gold," return in this extraordinary new adventure from the number-one "New York Times"- bestselling author.
With "Spartan Gold," a daring thriller that "Publishers Weekly" proclaimed "solidly in the Cussler tradition, and] sure to please new fans and old," Clive Cussler introduced husband-and-wife treasure-hunting team Sam and Remi Fargo. In their electrifying new adventure, the Fargos make a startling discovery that others would kill to keep hidden...
While scuba diving in Tanzania, Sam and Remi Fargo come upon a relic belonging to a long-lost Confederate ship. An anomaly about the relic sets them off chasing a mystery-but unknown to them, a much more powerful force is engaged in the same chase. Mexico's ruling party, the ultranationalist Mexica Tenochca, is intent on finding that artifact as well, because it contains a secret that could destroy the party utterly.
Through Tanzania and Zanzibar, into the rainforests of Madagascar, and across the Indian Ocean to Indonesia and the legendary site of the 1883 Krakatoa explosion, the Fargos and their ruthless opponents pursue the hunt-but only one can win. And the penalty for failure is death.
Filled with the dazzling suspense and breathtaking action that are Cussler's trademarks, "Lost Empire" is a stunning new novel from the grand master of adventure.

Clive Cussler is the author of many "New York Times" bestsellers, most recently "The Spy" and "Lost Empire." He lives in Arizona.

Grant Blackwood caught the fiction-writing bug at the age of eighteen while reading Clive Cussler s The Mediterranean Caper, and spent the next four years working in different styles of fiction before settling on novel-length work. Mr. Blackwood is a U.S. Navy veteran, having spent three years active duty aboard the guided missile frigate USS Ford as an Operations Specialist and a Pilot Rescue Swimmer. Two months after leaving the Navy in July 1987, Mr. Blackwood started the first draft of his first novel, which as he puts it, wasn t good enough to be published, but good enough to earn a spot in my sock drawer. It took me several more years of rewriting before I realized the publishers and agents who d been saying no were saying no for a good reason. Twelve years to the day after leaving the Navy, Mr. Blackwood received an offer from Penguin-Putnam/Berkley to buy his second novel, The End of Enemies, which hit the stands May 8th. Mr. Blackwood is 36 years old and lives in Minnesota, where he is working on this next novel, the second in the Briggs Tanner series of thrillers, which is due out in Spring/Summer of 2002."