Motel of the Mysteries (Paperback) 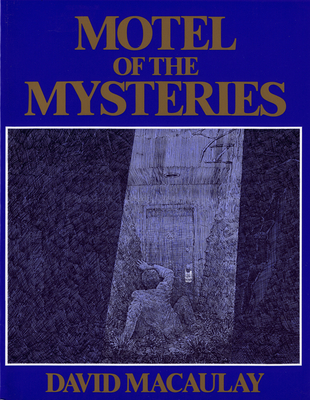 It is the year 4022; all of the ancient country of Usa has been buried under many feet of detritus from a catastrophe that occurred back in 1985. Imagine, then, the excitement that Howard Carson, an amateur archeologist at best, experienced when in crossing the perimeter of an abandoned excavation site he felt the ground give way beneath him and found himself at the bottom of a shaft, which, judging from the DO NOT DISTURB sign hanging from an archaic doorknob, was clearly the entrance to a still-sealed burial chamber. Carson's incredible discoveries, including the remains of two bodies, one of then on a ceremonial bed facing an altar that appeared to be a means of communicating with the Gods and the other lying in a porcelain sarcophagus in the Inner Chamber, permitted him to piece together the whole fabric of that extraordinary civilization.

David Macaulay is an award-winning author and illustrator whose books have sold millions of copies in the United States alone, and his work has been translated into a dozen languages. Macaulay has garnered numerous awards including the Caldecott Medal and Honor Awards, the Boston Globe–Horn Book Award, the Christopher Award, an American Institute of Architects Medal, and the Washington Post–Children’s Book Guild Nonfiction Award. In 2006, he was the recipient of a MacArthur Fellowship, given “to encourage people of outstanding talent to pursue their own creative, intellectual, and professional inclinations.” Superb design, magnificent illustrations, and clearly presented information distinguish all of his books. David Macaulay lives with his family in Vermont.

"David Macaulay . . . is a superb craftsman and an imaginative writer and illustrator . . . His new book is a marvel of imagination and a comfortable satire. He projects a time when our civilization will have been buried . . . As always with Mr. Macaulay's books, wonderfully illustrated." The New York Times —