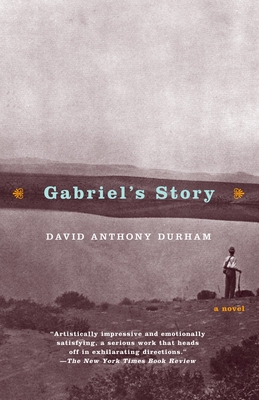 When Gabriel Lynch moves with his mother and brother from a brownstone in Baltimore to a dirt-floor hovel on a homestead in Kansas, he is not pleased. He does not dislike his new stepfather, a former slave, but he has no desire to submit to a life of drudgery and toil on the untamed prairie. So he joins up with a motley crew headed for Texas only to be sucked into an ever-westward wandering replete with a mindless violence he can neither abet nor avoid–a terrifying trek he penitently fears may never allow for a safe return. David Anthony Durham is a genuine talent bent on devastating originality and Gabriel’s Story is as formidable a debut as we have witnessed.

David Anthony Durham was born in 1969 to parents of Caribbean ancestry. He won the Zora Neale Hurston/Richard Wright Fiction Award in 1992 and received an MFA from the University of Maryland in 1996. He has lived and traveled widely throughout America and Europe. Durham, along with his wife and daughter, now divides his time between the United States and Scotland.

“Sweeps the reader up into a fascinating, Oz-like whirlwind of language.”–San Francisco Chronicle

“Moving. . . . The moral gravity of Durham’s narrative is offset by his attentiveness to the primacy of nature in the Western landscape.” –The New Yorker

“Durham captures with exquisite precision the isolation, loneliness and cruelty of life in the vastness of the West . . . . The reader turns the last page with regret at the journey’s end.” –The Times-Picayune (New Orleans)