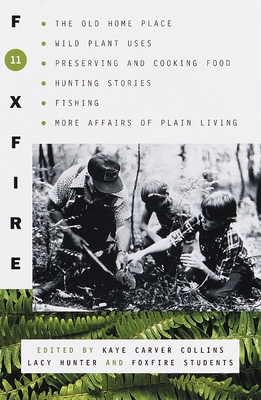 This is book number 11 in the Foxfire Series series.

First published in 1972, The Foxfire Book was a surprise bestseller that brought Appalachia's philosophy of simple living to hundreds of thousands of readers. Whether you wanted to hunt game, bake the old-fashioned way, or learn the art of successful moonshining, The Foxfire Museum and Heritage Center had a contact who could teach you how with clear, step-by-step instructions.

This eleventh volume celebrates the rituals and recipes of the Appalachian homeplace, including a one-hundred page section on herbal remedies, and segments about planting and growing a garden, preserving and pickling, smoking and salting, honey making, beekeeping, and fishing, as well as hundreds of the kind of spritied firsthand narrative accounts from Appalachian community members that exemplify the Foxfire style. Much more than "how-to" books, the Foxfire series is a publishing phenomenon and a way of life, teaching creative self-sufficiency, the art of natural remedies, home crafts, and other country folkways, fascinating to everyone interested in rediscovering the virtues of simple life.

Kaye Carver Collins is the community and teacher liaison at The Foxfire Fund, Inc. Lacy Hunter is a sophomore at Brenau College in Gainesville, Georgia.