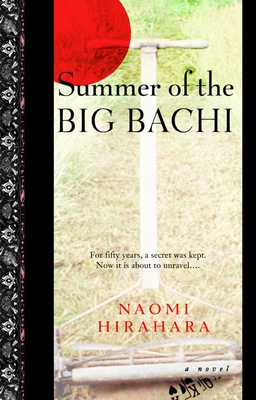 This is book number 1 in the Mas Arai series.

In the foothills of Pasadena, Mas Arai is just another Japanese-American gardener, his lawnmower blades clean and sharp, his truck carefully tuned. But while Mas keeps lawns neatly trimmed, his own life has gone to seed. His wife is dead. And his livelihood is falling into the hands of the men he once hired by the day. For Mas, a life of sin is catching up to him. And now bachi—the spirit of retribution—is knocking on his door.

It begins when a stranger comes around, asking questions about a nurseryman who once lived in Hiroshima, a man known as Joji Haneda. By the end of the summer, Joji will be dead and Mas’s own life will be in danger. For while Mas was building a life on the edge of the American dream, he has kept powerful secrets: about three friends long ago, about two lives entwined, and about what really happened when the bomb fell on Hiroshima in August 1945.

A spellbinding mystery played out from war-torn Japan to the rich tidewaters of L.A.’s multicultural landscape, this stunning debut novel weaves a powerful tale of family, loyalty, and the price of both survival and forgiveness.

“Naomi Hirahara's story of forgotten men who share an unforgettable past sweeps the reader into a world most of us know little about. Luckily, our guide is Mas Arai, a complete original, and Hirahara's sure and generous voice brings him vividly to life.”—S.J. Rozan, Edgar award winning of Winter and Night

“Naomi Hirahara is a bright new voice on the mystery scene. Summer of the Big Bachi presents an intriguing puzzle written with a true insider’s eye for Japanese American life”—Dale Furutani, Anthony award winning author of Death in Little Tokyo

“A novel about social change wrapped inside a mystery, Summer of the Big Bachi toggles deftly between past and present and reveals the hopes and compromises that lurk on the fringes of the American Dream.”
—Denise Hamilton, Edgar award nominated author of Last Lullaby