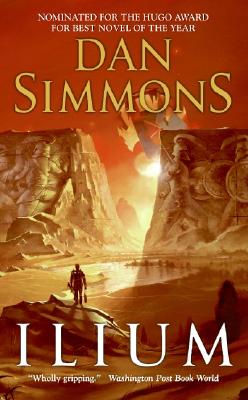 The Trojan War rages at the foot of Olympos Mons on Mars -- observed and influenced from on high by Zeus and his immortal family -- and twenty-first-century professor Thomas Hockenberry is there to play a role in the insidious private wars of vengeful gods and goddesses. On Earth, a small band of the few remaining humans pursues a lost past and devastating truth -- as four sentient machines depart from Jovian space to investigate, perhaps terminate, the potentially catastrophic emissions emanating from a mountaintop miles above the terraformed surface of the Red Planet.

Dan Simmons is the Hugo Award-winning author of Hyperion and The Fall of Hyperion, and their sequels, Endymion and The Rise of Endymion. He has written the critically acclaimed suspense novels Darwin's Blade and The Crook Factory, as well as other highly respected works, including Summer of Night and its sequel A Winter Haunting, Song of Kali, Carrion Comfort, and Worlds Enough & Time. Simmons makes his home in Colorado.

“[Ilium] will leave most readers waiting breathlessly for the next installment...utterly addictive.” — Kirkus Reviews